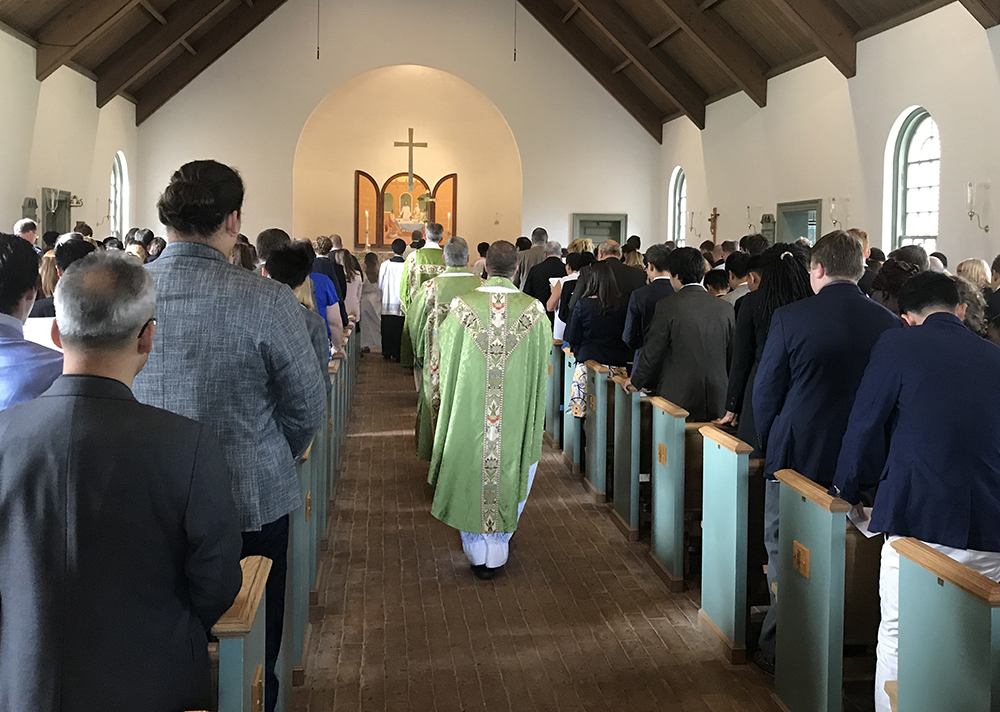 “All scripture is inspired by God and profitable for teaching for reproof, for correction, and for training in righteousness, that the man of God may be complete, equipped for every good work.”
(2 Timothy 3.16)

In nominee . . .
Last Saturday, I had the pleasure of attending the wedding of a friend who was remarrying at the age of 60 after suffering a divorce some fifteen years ago.

I say that she suffered a divorce because she is a particularly sweet and kind woman who lived for her children and husband as best she could until he left her.  Although she was stunned and wounded, she continued to take close care of her two sons, even though one was now in college, got a job, “downsized,” and built a social life and found new friendships in her large and loving parish.

In the eyes of the world, she was a “loser,” and her story was a sad one:  she lost a great deal (her marriage to a successful man, her house in a nice neighborhood), and she was left with real challenges:  her older son had some health issues and the younger some learning issues; she had to adjust financially; find a job; and she was socially isolated.

But in the eyes of God, she was blessed, because she was a selfless and loving woman, who had done nothing wrong, and to her great credit, rejected the darkness of bitterness, self-pity, anger, and revenge.  With remarkable resilience, she adjusted and built a new life based on what she cared about:  her children, her friends, and her faith in God.

And as a result, she never ceased to be the same open-hearted, kind, enthusiastic, self-giving person I had always known her to be.  She did her best not to become ugly or mean, and she did not stay a victim.

And then beyond any expectation she met a good man who loved her and announced that she was getting married, and I made a point of going to the wedding, because I was just so pleased for her and honored to be invited.

And what was interesting about the wedding was that many of the guests had grown up, as I grew up and the bride grew up, in that private school northwest Washington, Bethesda-Chevy Chase world we have been hearing so much about in the news recently in relationship to Judge Kavanaugh’s candidacy for the Supreme Court and Dr. Blasey Ford’s stunning accusation against him.

Now, here let me say that Judge Kavanaugh, like so many people these days, is younger than I am, so I did not know him, and the Georgetown Prep/ Stone Ridge world he grew up in did not intersect with the St. Albans/NCS world that I grew up in.   The link for me is Landon and Holton Arms where Dr. Ford attended, as I had many friends and neighbors at those schools, and several, because the bride also went to Holton, were at the wedding.

To be honest, the crowd at this wedding was, like the bride and me, “the good kids” and not “the cool kids” growing up, so we did not go to parties like that, and the social scene described in the press became, I gather, even more toxic after we graduated, but I sat between two women at the wedding lunch, one of whom knew Dr. Ford and the other Judge Kavanaugh personally, and this made for an animated conversation. What I will tell you is that it was the universal view of everyone I spoke to that the press’ description of parties and gatherings for drunken, privileged teenagers in their parents’ houses and backyards was entirely accurate.

Now, lest anyone get nervous, let me be quick to say that I am making no political statement here.  It would be entirely inappropriate for me to take one side or the other in what has become a highly politicized debate from which nobody has emerged undamaged, most especially the Senate.
But there are some take-aways from this sad tale which we do well to note and to consider as we gather at Saint James School and at this altar for Parents’ Weekend.

First, teenagers and alcohol do not mix well.  When teenagers gather to drink, they often, if not usually, get drunk, and when they are drunk, they lose their inhibitions and therefore often act in reckless and aggressive ways, which can cause real harm to themselves and to others. This is why the legal drinking age is 21.

Second, the consequences of these behaviors can be truly terrible personally, emotionally, and legally, particularly if the aggression is sexual.

Third, parents who host or enable such gatherings are endangering their children and other people’s children, however “safe” they may think these gatherings may be.

And fourth, they are subverting the moral purpose of their child’s school.

This is especially true in the case of a church school, like Georgetown Prep and Saint James School, where we care about the “goodness” and not just the success of our students.

It is in fact the mission of the Jesuits at Georgetown Prep to develop “men for others” and ours at Saint James to develop “leaders for good in the world.”

And yes, we want them to be resilient and resourceful and fulfilled in their lives and careers to come, but never at the expense of somebody else or at the cost of their souls.

We teach this lesson on the athletic field and we enforce it with our honor code:  winning isn’t everything.  It just isn’t.  Some of you won yesterday, and some of you lost, and winning sure feels better than losing, especially when the game is a close one like the football game against Potomac, but in the end who you are and how you played the game is much more important than whether you lost or won. Further, it is this “winning is everything attitude” which is poisoning and corrupting our politics and tearing our country apart.

Certainly,  I accept that the world is a challenging and tempting place these days, and it is not good preparation to overprotect our students, but we do need – all of us - to teach the right lessons, to maintain the right boundaries, and to set the right example as the adults who love them, so we need to be on the same page on this.

The truth is that this school, like every good school, functions in the world as it really is, so we equip our students to be productive and significant in their lives as best we can, giving them the skills that they will need to succeed in college and beyond.  This is why we set our standards high in every way that we engage and challenge them:  academically, athletically, artistically, and socially.

But as much as we are in the world, we are not of the world, so what we really want for our students is for them to be kind and honest.  And yes, we want them to be strong and courageous, but not for their own sakes, rather for the good that they will do for others, for all those people whom they will serve, protect, honor, and love.

So this is our hope for them, our dream, if you will:  that they will be faithful, generous, and good – just like my friend at her wedding.  Not necessarily “winners” in the eyes of the world, but servants in the cause of God.