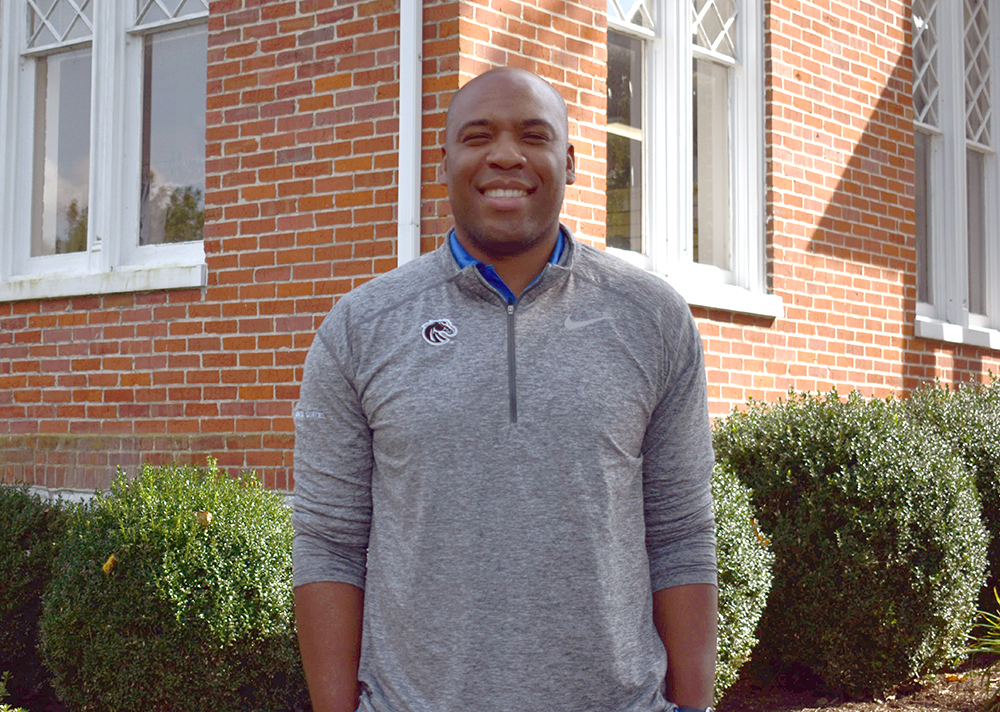 Chris Acker ’99 recently made a visit back to the Saint James campus while on a recruiting trip on the East Coast.  Acker has started his second year as an assistant basketball coach at Boise State University, and is in his 11th year coaching in the college ranks.

Acker was exceptional in his first season on the Boise State staff, helping the Broncos to a 23-9 record and a 13-5 record in Mountain West play. The 23 wins tied for the fourth most in program history as the team made it to the National Invitation Tournament (NIT). Acker is a skilled player developer and plays a vital role in defense, recruiting, and skill development for the Broncos.

Acker was also exceptional during his time at Saint James School, leading the Saints basketball team to 20-win season his senior year. Acker, along with Larry Scott ‘99 and John Hartman ‘99, became the first Saint James players nominated for the McDonald’s All-American team.
Originally from Compton, CA, Acker remembers arriving on the Saint James campus for the first time.

“I was overwhelmed. It was the first time I was going to be away from the friends and family that were familiar to me,” he said.  “It all sounded good before I was leaving, but when I got off the plane and saw all trees and no buildings I thought, ‘what did I just get myself into?’”

Though he was only here two years, he has many memories and feels he applies the lessons he learned at Saint James to his everyday life.

“I learned a lot about life and a lot about coexisting and sharing and being a part of something bigger than myself here,” he said.  “I learned how to be selfless. The ups and downs, trials and tribulations really molded me.”

Ironically, one memory that sticks out to Acker didn’t occur on the basketball court but on the football field.

“I hurt my shoulder playing football and Father Dunnan took me to the hospital, took me to dinner, and stayed with me the entire day,” he said. “He talked me through it.  I was really stressed because I thought I wouldn’t be able to play basketball that year. He was there for me and helped me through that process mentally.  I don’t think he realized how much that meant to me.”

After graduating from Saint James, Acker played two years of community college basketball before finishing his playing career at Chaminade University in Hawaii. After a productive two seasons, which included helping the Silver Swords to an upset of Villanova in the 2003 Maui Invitational, Acker went on to a four-year professional career in China, Greece, Portugal, and the United States.

“I’ve hiked the Great Wall, I’ve been to the Acropolis in Greece, and I’ve been to some great soccer games in Lisbon,” he said. “I feel grateful to have had those opportunities.”

Acker first started coaching at Citrus College in Glendora, CA, serving as an assistant coach and the associate head coach during his six-year tenure. He helped the Owls win the 2008 California state championship and four Western State Conference championships.

During that time, he was also serving as the Youth Programs Director for the Los Angeles Clippers (NBA) and Los Angeles Sparks (WNBA).

Former Saint James teammate Philip Scott is now serving in that role after being recruited by Acker to fill his vacancy.

Acker then coached at West Los Angeles College for two years before moving on to the University of Hawaii. In Acker's two seasons at Hawaii, he helped the Rainbow Warriors to the 2016 Big West title and a win in the NCAA Tournament. He oversaw the team's defense and was the player development coordinator. His skill development highlights include helping Stefan Jankovic progress into the Big West Player of the Year and earn a free-agent contract with the Miami Heat.

Acker continues to move up the college coaching ranks, now at Boise State, where he lives with his wife and two children.  He is looking forward to the upcoming season for the Broncos.