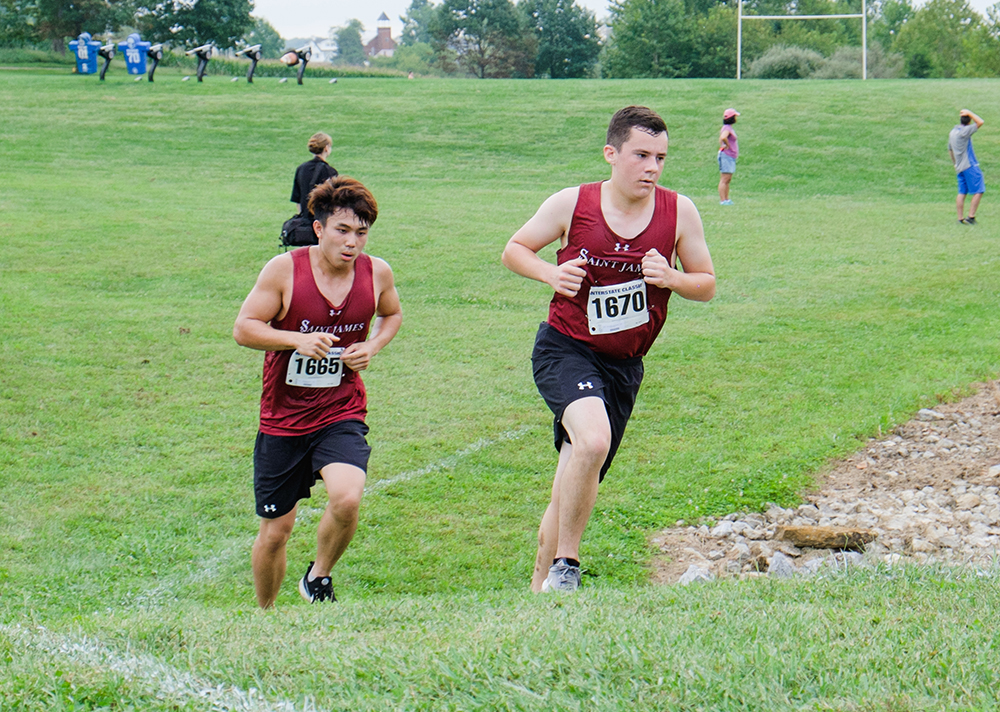 The 2018 Saint James Cross Country team consisted of 27 runners and was led by Head Coach Katie Ellis and Assistant Coaches Ian Brauner, Molly Billings, and Barry Salisbury. On the boys’ side, this was a rebuilding season, characterized by success from new team members, and new growth from returning members. The girls’ team saw tremendous improvement over the course of the season, placing higher in every meet that they also ran in last year, and contending strongly against local competition in the IPSL race.

The biggest highlight of the season was the MAC/ISL Championship in Derwood, MD on the most difficult course the team saw all season. This year the difficulty of the course was significantly increased by challenging conditions. Runners were competing in the mud and rain, which slowed everyone down. Regardless, the boys’ team had a top five average of of 23:14 which is the seventh fastest in school history for this championship. The team placed 7th in the race. The girls’ team had the opportunity to compete in the Varsity B race for the ISL, and earned their first team victory, placing first out of 17 ISL teams. Their top five average was 23:00, which makes them the fastest girls' team in school history. Stand-out performances by the top five girls led to this strong finish: Elise Bamforth won the race, Darcy Farrell placed second, Morgan McMahon placed third, Chaltu Watkins (Third Form) placed 11th, and Pearl Walker (Second Form) placed 16th.

Fifth Former and new runner Kevin Jin led the boys' team for the majority of the season and earned the Most Valuable Runner award at the Varsity Banquet. He was often closely followed by Fourth Form veteran runner Jackson Pentony, who was named Most Improved Runner for his efforts this season. Returning Fourth Former Will Zimmermann was also often in the top three for the varsity team, and he received the Coaches’ Award for his strong contributions both during meets and practice this season. Fourth Form veteran runner Mike Lau was also a big contributor for the boys’ team all season, placing third or fourth for the team in every race. Long time runner and Sixth Form leader Jack Walker was a consistent contributor to the top five this season to cap off his successful cross country career at Saint James. New runners Nicky Pank and Willson Moody (in Fifth and Third Forms respectively) rounded out the top seven for the boys' team and made great progress this season. Notably, Moody was one of only two boys on the team to run a personal best in the challenging conditions of the MAC Championship.

Many new runners were behind the top seven pushing them to improve in every practice and race. These included Rodrigo Tejado (Third Form), Jack Weisgerber (Fourth Form), Bill Li (Fifth Form), and Will Moerschel (Sixth Form). Returning runners —including Fifth Formers  Patrick Nguyen and Evan Fulmer — also pushed themselves and their teammates this season.

Farrell, McMahon, and Watkins were consistently in the top three for the girls’ team and received the Most Valuable Runner award, the Coaches Award, and the Most Improved Runner award respectively at the Varsity Banquet. Returning Sixth Former Kate Wu generally held the fourth position on the team in the regular season and made great improvements to her running this season. New Second Form runners Bamforth, Walker, and Kayla Handley were not able to compete until late in the season, but once they did they were tremendous contributors to the team success at the IPSL and ISL races. New Third Form runners Audrey Johnson and Helen Jackson contributed to the top seven and team score this season, and Johnson was one of very few to run a personal best in the final race. New Fourth Former Marley Froe improved dramatically over the course of the season, and returning Fourth Form runner Venus Anani had a breakthrough season dropping over 12 minutes from her 5k personal record of last season.

Returning Fourth Former Laurelle Maubert was not able to compete this season due an injury, but she was a great contributor to the management of the team on race days. Similarly, new Sixth Form team member Chris Chaney was not able to compete but helped out at races. Returning Fourth Form runner Connor Port was poised to take the top position on the boys' team this season after a summer of hard work, but was unable to run regularly because of injury.

Improvement is the most important metric for determining the success of a cross country season, and the 2018 season proved to be one of impressive improvement for the team. Over the course of the season, the 11 girls who competed in multiple races dropped a total of 21 minutes and 41 seconds off of their 5K race times. The 14 members of the boys' team dropped total 20 minutes, and 52 seconds in their 5K times.