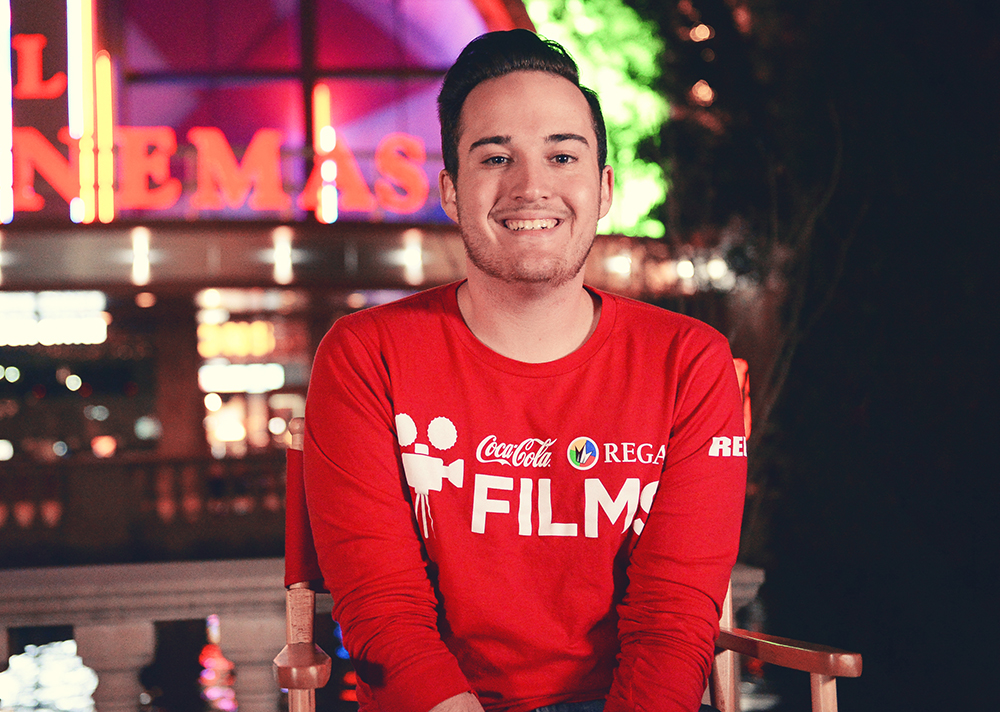 If you saw a movie at Regal Cinemas in October or November, chances are you watched a Coca-Cola commercial prior to your feature film that was produced by Saint James graduate Hunter Strauch ’14. Strauch returned to the SJS campus in September to meet with students interested in television and film, and discussed the process for making the 35-second commercial.

This past year, his senior year at Elon University, Strauch and fellow Elon student Patrick Wei entered the Coca-Cola Regal Films contest, ultimately placing third in the competition with the commercial airing in theaters nationwide from October 12-November 27.

The contest provided an opportunity for up-and-coming film students to showcase their talent, with more than 450 scripts entered from some of the country’s top film schools.  The scripts were narrowed down to the top 15, at which point those chosen got to work with Coca-Cola to storyboard their script.  At the end of that process, those with the most potential were narrowed down into the top five.  Those five finalists were given $15,000 by Coca-Cola to produce their commercial.  Along with Elon, schools represented in the top five were UCLA, Columbia University, Ithaca College, and the School of Visual Arts in New York City.  Three of those schools were graduate programs.

Strauch actually had two films he was producing in the top 15, and found the initial process of working with Coca-Cola to be stressful as they had a lot to do in a short amount of time.  He said he felt determined to get a least one film in the top five, and found out over Thanksgiving break last year his film with Wei had made it.  Strauch and Wei were flown to Los Angeles to meet with executives at RED Studios Hollywood to learn more about the process of the competition.

“After that, we really had to hit the ground running,” he said. “We shot our commercial at the end of January, so we had to get the crew situated, find a location to shoot, and secure the actors. Everything moved incredibly quickly during that month and a half.”

As the producer, it was Strauch’s job to scout locations, secure staffing, and work with Coca-Cola to make sure they were making progress.  They had a manager who handled communication between Strauch’s team, Regal, and Coke.  Strauch had primarily worked on short films prior to this, and so working on a commercial was a new experience.

“It was different working with a client, especially one of the largest trademarks in the world, who wanted to be both innovative and traditional,” he said. “We had some rules we had to follow to get approved by Coca-Cola.  It makes sense – they are giving us the money, so in the end it’s their commercial not ours.”

After scouting theaters in North Carolina, where Elon is located, Strauch and his team made the decision to film in Atlanta, GA.

“I thought we would have better luck working with professionals in Atlanta,” he said. “There are more camera companies to rent from and more working actors.  We drove down Wednesday morning, filmed Wednesday overnight, and drove back Thursday.”

Strauch found that his background in communications helped throughout the process because he didn’t just focus on film production.

“Having that liberal arts education really helped because I was able to do more than produce; I was able to manage, do public relations, and really focus on the project as a whole and not just my one job within it.”

Strauch was also responsible for overseeing the budget and how the $15,000 was used.  They hired a professional director (an Elon alumnus), production designer, gaffing team, composer, and food stylist (“She knew how to make microwavable pretzels look amazing.”).

“My main goal more than anything else as I was planning out who would be on set was, whenever I could bring in a professional, I would provide a student assistant from the school,” he said. “This way they had an opportunity to work with a professional in the industry and shadow them.  Nobody was left behind with the professionals doing everything – it was a very hands-on learning experience.”

Strauch is proud that they were able to give so many Elon students a chance to be involved.

“Even though two people technically won the competition, I don’t like to say that because it was really our whole school,” he said. “We had 45 people from Elon involved in the project.”

Strauch said it was difficult being a full-time student while making the commercial, and he feels grateful to have had the support of his professors.

“My professors understood when I would rush out of class to take a phone call,” he said. “It was nice to have that support from them, and to know they wanted the project to be as good as it could be.  It really pushes for what Elon stands for – learning through experience.”

When Strauch first arrived at Elon his freshman year, he was an elementary special education major.  After touring the School of Communication during new student orientation, he soon after switched because he thought it would be more fun.  He became very involved in the on-campus clubs, including CINELON, an on-campus, student-run production company; ESTV, Elon Student Television, where he helped produce special projects; and the campus radio station.

“It was through these experiences that I realized I wanted to be a producer because I like to talk and work with people,” he said. “I never would have learned that in the classroom.”

He worked on many short films on campus, and produced BFA projects for two seniors, one with a $7,000 budget and another with a $15,000 budget.

Strauch also studied abroad in London, where he interned for a small production company working on script development.

“I read three to four scripts a day, made notes on what I liked and didn’t like, and passed them along to producers,” he said. “It helped me figure out that I enjoy screenwriting.”

“Those are two things that Saint James does really well, and I think really helped me in my major,” he said.  “I think Saint James helped me with the academic side of college as well as the film side because I can manage people and time better than most because of the schedules you follow at Saint James.”

Strauch graduated from Elon in May with a Bachelor of Arts in Cinema and Television Arts.  He spent the summer working for the Contemporary American Theater Festival at Shepherd University, his third summer working at the festival.

“I started as a marketing intern, and made my way up to event manager,” he said. “At the height of the festival this summer, I was managing 15 events per week for patrons and guest artists.”

Strauch very recently moved to Los Angeles, where he hopes to find work in the production and development of feature-length films, though he isn’t closing doors on any opportunities that might come up.

“I know that I haven’t completely found what I love doing,” he said. “I have a lot to learn from this industry, and I know I have a lot of room to grow, and I’m excited to see where it takes me.”