Share to FacebookShare to TwitterShare to LinkedInShare to PinterestShare to EmailPrint this page
Julian Smith '06: Mastering the Sports World 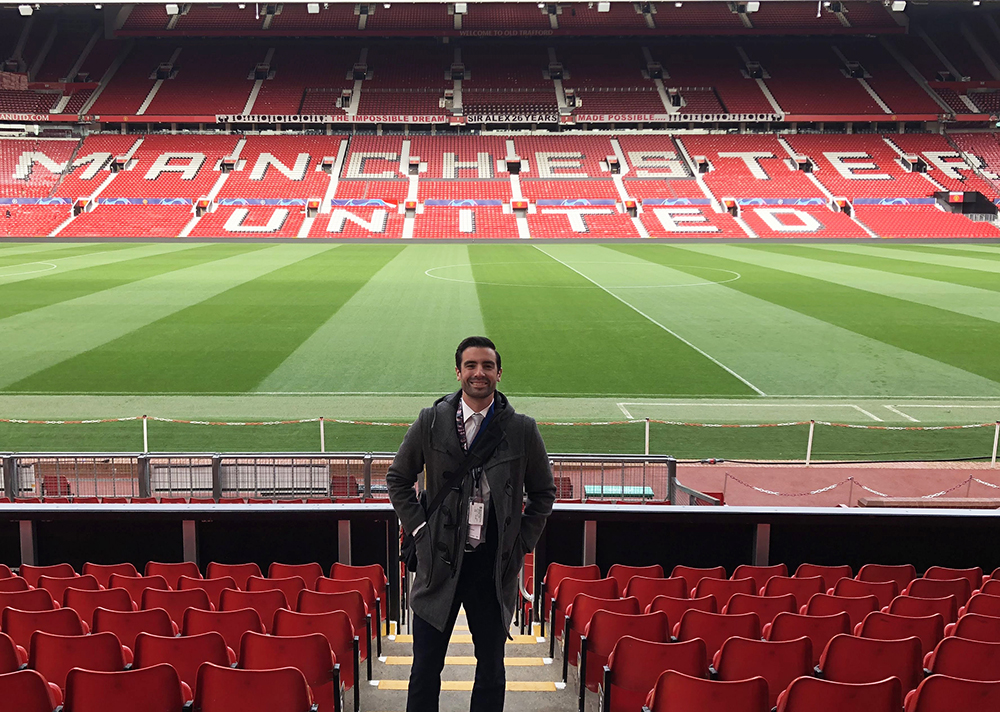 Julian Smith ’06 discovered a unique opportunity to merge his career and his passion for soccer.  Smith is one of 28 students who was accepted into the 19th edition of the FIFA Master, and he began his journey in the year-long program in September. Organized by the International Centre for Sport Studies (CIES), the FIFA Master in Management, Law, and Humanities of Sport promotes management education within the sports world.

Participants study sport at three partner universities: De Montfort University in Leicester, United Kingdom; SDA Bocconi School of Management in Milan, Italy; and the Université de Neuchâtel in Switzerland.  The course has three modules that focus on various and interrelated aspects of sport, including humanities, management, and law. Once students complete the program, they receive a joint-diploma delivered by the three universities.

“I hadn’t considered working in sports, but over time that’s where my passion was,” said Smith. “I came across the FIFA Master program and that seemed like a great opportunity. So far, it’s been amazing.”

Smith received his Bachelor of Business Administration in International Business from The George Washington University in 2010.  A dual citizen of the United States and Portugal, Smith knew he wanted to work internationally and finance seemed the best career option.  After receiving his degree, he started working for a bank in Portugal. Due to the unstable economic environment in the country, Smith packed up without a job lined up and moved to New York City in 2013.  He worked briefly in real estate before taking a position at Moody’s Corporation.

“I worked my way up at Moody’s through dedication and hard work through a variety of roles over five years before this opportunity presented itself with FIFA Master,” he said.

Smith has spent the first several months of the program studying the humanities portion of the program in England, getting to know his classmates, and visiting sporting sites to meet with top executives from high-level organizations.  The sites and teams they have visited include Wimbledon (tennis), Manchester United (soccer), Leicester Tigers (rugby), Leicester City FC (soccer), and The Professional Footballers’ Association.  Being a soccer fan (or to Smith and the rest of the world, a football fan), the trip to the Manchester United stadium, Old Trafford, was a special experience.

“Their stadium is just legendary, so getting a tour and walking through it was overwhelming,” he said. “We met with a woman from finance as well as a marketing representative who discussed engaging fans. We also met with an assistant coach of the women’s team that just started this year. It was really interesting.”

Smith said that although the program is branded by FIFA (Fédération Internationale de Football Association), the governing body of international soccer, it does cover all sports.

“The program encourages people who are not soccer fans to join, including a former professional skier and synchronized swimmer, who are part of this year’s cohort,” he said.

“The group is diverse and we also represent a variety of industries,” Smith said. “Conversation is always interesting whether we’re in class or out to dinner.  We each have different strengths and weaknesses, so it’s an incredible environment.”

Smith said he is looking forward to the business/finance module in Italy to see how his experience translates to the world of sports. He hopes to share his knowledge and help his fellow students navigate that course material in the same way others are helping him.

Smith’s love for soccer began in 2003 while a student at Saint James.  He started playing more seriously and his coach encouraged him to watch European soccer.

“I wanted to support a team from Portugal, and there was a good team from the Champion’s League called FC Porto that won the European Cup in 2004,” he said. “That solidified my passion for the game.”

Smith ended up at Saint James after a childhood spent in various parts of the world, including Croatia, Portugal, and Italy before his family settled in Washington, DC.  He wanted to stay in one place and the idea of a boarding school appealed to him.

“It felt like Saint James was a great place for me to mature and grow,” he said. “I visited several other schools but really felt a connection at Saint James.”

In addition to playing soccer, Smith played basketball, served as a tour guide and chapel reader, and was a prefect, a role he took seriously knowing he represented the students to the faculty as well as the faculty to the students.

“Saint James really helped to turn me into the successful, moral person I feel I am,” he said. “The School helped mold me and I feel grateful for that.”

Smith will begin the next part of the FIFA Master program in Milan in January before heading to Switzerland in March.  The program will be complete in July, at which point Smith plans to explore career options.

“Part of the reason to do this course is to see what’s available. Being part of FIFA Master opens you up to a world that is not always easily accessible,” he said. “By being part of this community, I’m hoping to see where my experience fits in the sports world. I’ve always been ambitious and set the bar high, and I look forward to what’s next.”