This year, Saint James has introduced two new programs that challenge our students and enhance the non-academic aspects of our School.  The Fifth Form Leadership Retreat is designed to give students the opportunity to further develop their leadership skills before they take senior roles on campus in their sixth form year.  Choices and Connections is a new program aimed to promote healthy choices and life skills for our second through fourth form students.  Read on to learn more about each program.

Climbing. Jumping. Swinging. Soaring.  At the Fifth Form Leadership Retreat, students pushed themselves and tested their limits at Cedar Ridge Adventures in an effort to learn more about themselves as well as how to interact with and lead one another.

The fifth form class was broken up into three small groups (16-17 students in each) who then traveled to Cedar Ridge on separate days to complete a set of challenges.  The two-day retreat was made up of low-element team building activities as well as high-ropes course challenges.

“We had people challenge themselves, and take leadership roles within the group,” said Mr. Steve Lachut, Dean of Students.  “It was really quite impressive.”

Mr. Lachut is spearheading the effort to formalize leadership education at Saint James.

“We have the mission of ‘building leaders for good,’ and when I stepped into my new role as Dean of Students [last year], I recognized that leadership doesn’t just happen,” he said. “Although there are leadership roles on campus, students need more opportunities to develop those skills.”

Many of the leadership positions go to sixth formers, and so the goal of a fifth form retreat is to give those students the skills they need before they step into those roles.

“They are going to have the ability to guide the direction of the school next year, and they seem to have really taken to that concept,” said Mr. Lachut.

Both low and high ropes courses are great for developing leadership skills because students are pushed out of their comfort zones, must communicate with and rely on their peers, and must find their voice to complete a challenge, which leads to a sense of empowerment.

Fifth former Ben Couling found the high ropes challenge where they had to walk across a platform attached to a rope with fellow students supporting them to be the highlight of his day.

“It was terrifying, but so rewarding at the end.  It was a real team effort,” he said.

Couling said he was more nervous than he thought he would be, and was surprised by his classmates—many of whom were scared but everybody faced that fear and completed the challenges.

“I was put in a situation where I was uncomfortable, but I was able to overcome my fear and do it,” he said. “This left me feeling confident and I think that will help me later on, to overcome my nerves and know I can get through it.  Just don’t look down.”

Choices and Connections was a series of three on-campus meetings during which discussions were held on a variety of social issues that face our students both on campus and at home.  This program was designed for our second through fourth form students. Each meeting had a specific topic that was covered in small group settings facilitated by a faculty member.

Mr. Lachut said the initial interest in developing this program came after he attended a conference and recognized that the School could do more about addressing issues outside of academics, athletics, and arts.

“We want to talk to our students in depth about issues they face,” he said. “We want to challenge them with how they interact with one another, and how their actions affect others.”

The sessions were planned by Mr. Lachut and Ms. Angie Sievers, school counselor. During the first meeting, second and third formers discussed sleep habits, mindfulness, and nutrition, while fourth formers spent time on group dynamics and how to have effective group conversations. The second meeting focused on peer-to-peer relationships and romantic relationships for the second and third formers, and happiness and belonging for fourth formers.  During the final meeting, all forms discussed the effects of drug and alcohol use and ways teenagers can deal with peer pressure.

“Our faculty have been very supportive of the program, and happy to address these issues,” said Mr. Lachut. “It also gives them a chance to interact with students they don’t always see in class.”

Mr. Lachut feels the Choices and Connections program and the Fifth Form Leadership Retreat went well in their first year, and he looks to grow both programs.

“We’re going to get feedback and develop a more in-depth program,” he said. “My hope is to enhance our residential life and leadership curriculum.” 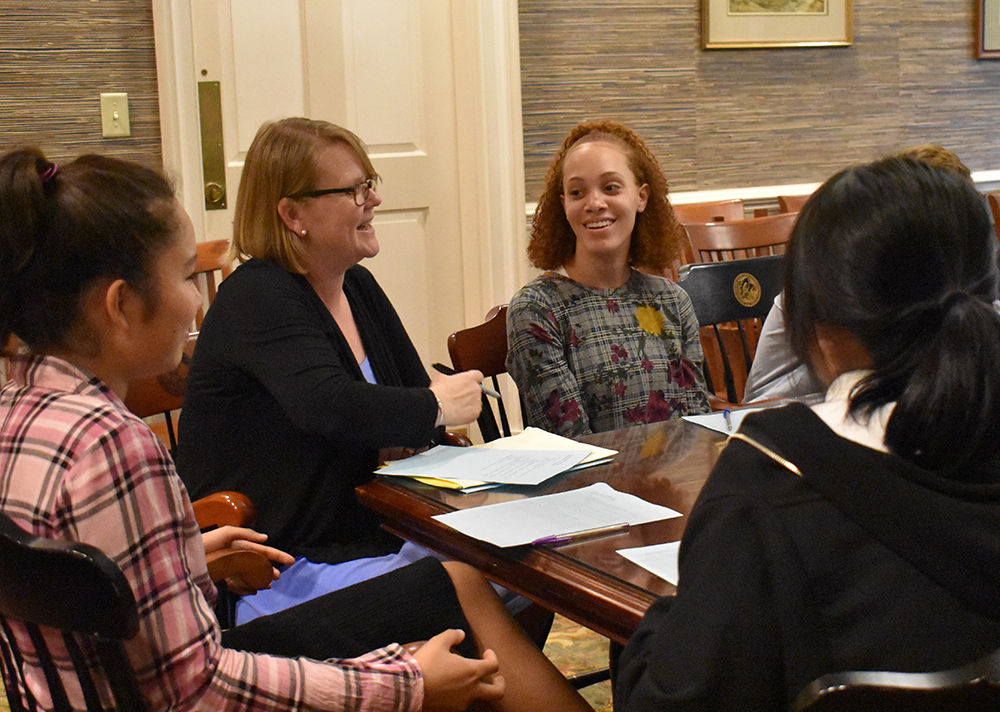