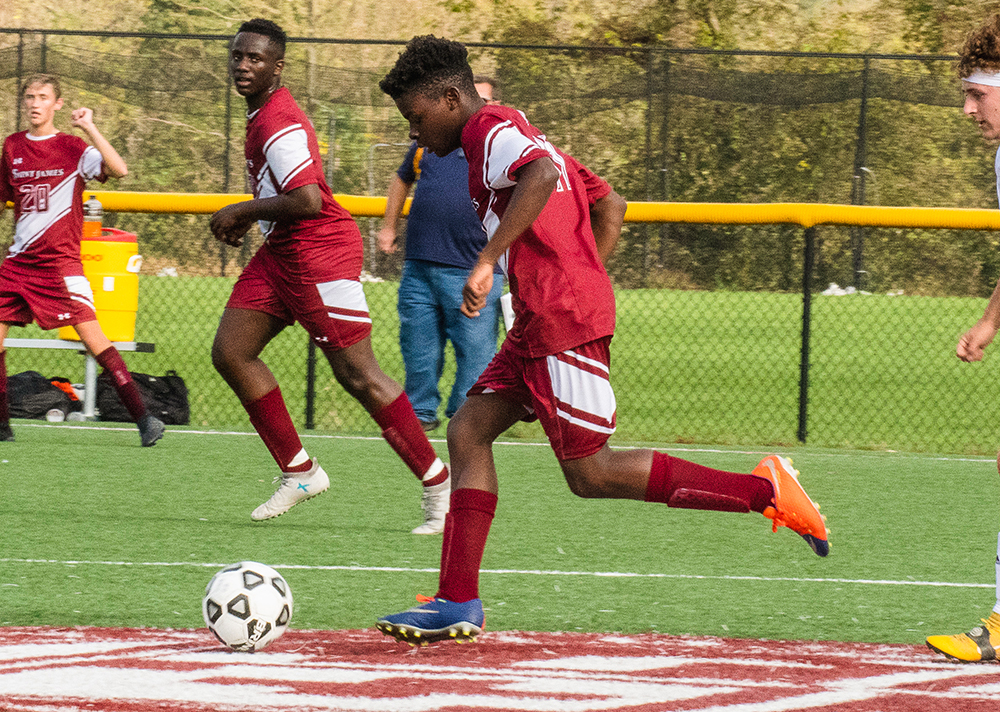 The 2018 Varsity Boys’ Soccer season began with the addition of two new coaches, Matt Snyder and Chris Plumadore.  Both Coach Snyder and Coach Plumadore came to the team with more than 10 years of coaching experience and a passion for coaching the game.

As always with change came an adjustment period for all involved.  The coaches had to learn about the players’ strengths, weaknesses, tendencies, and knowledge of the game and the players had to adjust to the new coaches’ philosophies, methodology, and coaching styles.  As the season began, the players as well as Coach Ben Heebner and Coaches Snyder and Plumadore went into Welcome Week full steam ahead with physically and mentally demanding three-a-day practices.

Some players rose to the challenge and some struggled.  Eventually some tough decisions were made and the final varsity roster was set.  With some late arrivals and a look to the future, the final roster ended with 23 players.

As the first game of the season at Bishop Walsh approached, there was a definite sense of excitement and uncertainty for the coaches and players.  Everyone was excited to see how the team would perform as the boys were learning and advancing with every practice.  On the other side of the coin, several players were put in positions they did not typically play in the past. The game resulted in a 1-0 loss with the Saints controlling the game but not finding the back of the net.  This proved to be an issue for the next several games.

The Saints next won their next game against St. John’s Catholic Prep (2-1) with Xzavier Long (Fourth Form) and Spencer McNamee (Sixth Form) each tallying a goal. They then tied Fannet Metal (3-3) in a double overtime game with Austin Grandstaff (Fifth Form) scoring two goals and Bryce Kilmer (Third Form) adding one.  Long and Gerry Tejado (Fifth Form) added an assist each and Owen Horrigan (Fifth Form) had seven saves in goal.

The following games were a loss to Martinsburg (1-3) and a tie against Spring Mills (2-2). In each of those games, the Saints controlled possession but failed to seize on several opportunities to score.  Shea Pena (Sixth Form) and Jakin Jeong (Sixth Form) each scored for Saint James in the draw with Spring Mills. The Saints completed a solid game against Hedgesville with a 2-0 win. The two goals both came on penalty kicks – one each by Kilmer and Grandstaff.  The team then struggled in losses to Sidwell Friends, Clear Spring, Flint Hill, and St. Andrews.

In the game against Smithsburg, the Saints found their ability to face adversity when they overcame a deficit and finished the game with two goals in the final 10 minutes of regulation to force a 2-2 tie. Jeong and Tejado had goals for the Saints. The team followed with losses to Georgetown Day School and Maret, and then bounced back with huge wins of 7-2 against Cumberland Valley Christian School and 7-0 against Berkeley Springs.

Looking back at the season the team found success and disappointment in different ways, in moments of both victory and defeat, including a frustrating loss to Goretti and the big win against Cumberland Valley. Other moments of success involved a bigger concept that will reap huge dividends in the future.  The team was showing tremendous signs of improvement in many close games, only to collapse after a simple mistake was made. The team acknowledged a history of losing that had created an expectation of losing.  With this understanding, the players began the process of changing that mentality and building a bright future for the team.

Team captains Jordan Walendom, Jakin Jeong, and Austin Grandstaff set the example for the team and led from the beginning both on and off the field.  Spencer McNamee, Thomas Bacon (Fifth Form), Nash Pena (Fourth Form), and Caleb Norris (Fifth Form) established themselves as dominant players on defense.  Gerry Tejado was a dynamic force in the midfield.  Shea Pena and Nirmal Singletary (Sixth Form) suffered injuries during the season but contributed on the field with their energy and experience when they were able.  Owen Horrigan played a solid season in the goal as he stepped up to fill the vacancy.  Newcomers Xzavier Long and Bryce Kilmer brought skill, experience, and creativity to the team.  Griffin Almany (Fifth Form) and Tom Hoang were solid players coming off the bench and filled in on both offense and defense, and Benny Buah was a solid contributor up front.  Tank Yanou (Fifth Form) subbed into the midfield when needed.  Other new additions such as Zachary Zanetti, Berke Sertcan (Fifth Form), Felipe Avellaneda (Third Form), and Martynas Sabaliauskas showed real promise for the future.  Sixth formers Ang Ngo and Dylan Weibel filled in on the field as well.  Every player on the roster regardless of his playing time stepped up in every practice and pushed each other to become better players.

In the end the team finished with four wins, 11 losses, and three ties.  These numbers don’t tell the whole story about the successes the team and individual players achieved.  We look forward to the future of Boys’ Varsity Soccer at Saint James.