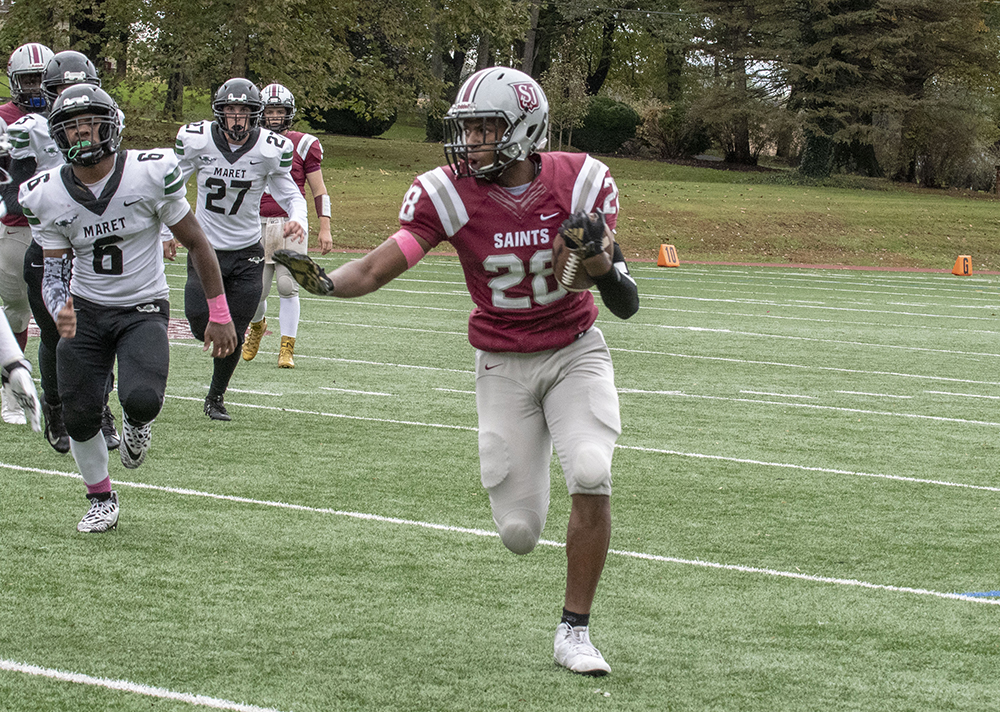 The 2018 Saint James football program had to replace a large group of graduated players who had made a huge impact on the program, and without hesitation new faces stepped in and helped the team to its third winning season in a row with a final record of 7-3.

Week two saw the Saints travel to Bishop Ireton to face another new opponent. The game was played under gloomy skies and a steady downpour, but the Saints made the best of the poor conditions handing the Cardinals their first loss of the season, 36-14.  The team ran for 221 yards with the strong running of Isaiah Knight (Fourth Form) and Ensor.  Knight and Lane Gay each tallied a rushing TD while Timmy Awofiranye (Sixth Form) and Purnell hauled in aerials for TDs from Dugas.  The Saint James defense recorded eight tackles for a loss and had three fumble recoveries.  Kicker Miles Wyndham (Sixth Form) showed his strong leg with three touchbacks on kickoffs, was 4 for 4 on point-after-touchdown kicks and booted two field goals of 44 and 43 yards to conclude the scoring.

The Saints next went on the road to face Washington County foe Smithsburg.  Perhaps the rainy, muddy conditions could have been a sign to the visiting Saints that this would be a messy contest both literally and figuratively.  Facing an unfamiliar opponent with an unusual offensive scheme, the Saints defense struggled to contain the small Leopard QB and fell behind at halftime. A rejuvenated Saint James team took the field the second half but couldn’t overcome the first half miscues, falling short with a 21-28 loss.

The Frederick Douglas Mighty Ducks came into town for a week four contest.  The Saints took their previous week’s frustrations out on the visitors by way of a 38-6 victory which was stopped early due to injuries on the Douglas side.  Saint James was led by a bevy of running backs including Ensor, Gay and Knight.  The real damage though came behind the passing of Dugas who was 14 of 20 for 265 yards and 5 TDs (two to Osinga and three to Myers).  Tanner Brandimarte (Fifth Form) led the secondary in tackles and pass break-ups from his safety position.  Sixth formers Jack Guillard, Jonathan Kamto, TJ Quelet, Gay, and Awofiranye kept Douglas ball carriers in check all day long.
The mid-point of the season saw the Saints host their first MAC opponent in Sidwell Friends School.  Quelet stepped into an unfamiliar role as the go-to running back for the Saints.  Quelet rushed 14 times through, over, and around the Quaker defense on his way to 162 yards.  The young Sidwell team harassed the Saints all day with strong play, but in the end the Saints had the win, 34-13.

Over Family Weekend, the Saints hosted another MAC opponent, the Potomac School Panthers.  The Saints had their eyes on revenge from last season’s loss.  The Saints came ready to play accounting for almost 400 yards of total offense, but the game perhaps will be best remembered as a lesson on finishing.  With only a few minutes remaining in the contest and the Saints firmly ahead 30-22 things went south for the home team.  With the ball in hand and a short clock the ball came loose, and a Panther defender pounced on the ball.  The Panthers managed to punch the ball into the end zone with just three seconds left on the clock, and then converted a two-point try to send the game into overtime. In overtime, Panthers found the end zone and went up 37-30.  The Saints responded by scoring quickly.  The Saints decided to try to end the contest with a two-point conversion attempt, but when the official blew the two-point try dead the ball lay at the one-foot line.  Twelve inches separated the Saints from victory.

With a short week of practice Saint James hosted new opponent, the Central Virginia Disciples. The Saints torched the Disciples 52-8 to push the team’s record to 4-2.  Knight led all rushers with 108 yards while von Einseidel, Myers, William Topham (Sixth Form) and Osinga accounted for 213 yards in receptions.

Flint Hill hosted Saint James for the third MAC contest of the year.  Flint Hill came into the contest undefeated and having averaged 43 points per game.  The Saints managed to hold the Huskies explosive team to 38 points but could not put the ball into the end zone.  Flint Hill would go on to steam roll its way through the MAC averaging almost 50 points per game.

The Saints held a Sixth Form recognition to honor the 14 graduating football student-athletes before the final home game against Maret.  Saint James dominated the line of scrimmage behind massive offensive lineman Miigwas Assance (Fourth Form), Steven Schwartz (Sixth Form), Carter Bowers (Sixth Form), Ben Couling (Fifth Form), and Tom Brow (Fifth Form).  This offensive line averaged 6’3” and 292 pounds.  They pushed the visiting Frogs around as the Saints rushed for nearly 300 yards, including 227 yards and three TDs from Knight.  The defense was led by Purnell, Kamto, and Quelet at their linebacker spots and steady contributions by Daniel Peacher (Third Form), Idriss Traore (Sixth Form), Awofiranye, Brandimarte and more Saint defenders.  In the end the Saints came away with a 22-19 victory.

The final game of the season was played at Williamsport.  Though close neighbors on the map, the Saints and Wildcats had never played football against each other.  The conditions could best be described with three words: cold, wet, and muddy. One the first play from scrimmage Knight raced untouched 80 yards for the TD.  Later in the game, Knight scored on a 90-year run. Dugas ran for a score after a bobbled snap and threw a TD to von Einseidel late in the game. The visiting Saints dominated the game offensively, defensively, and on special teams.