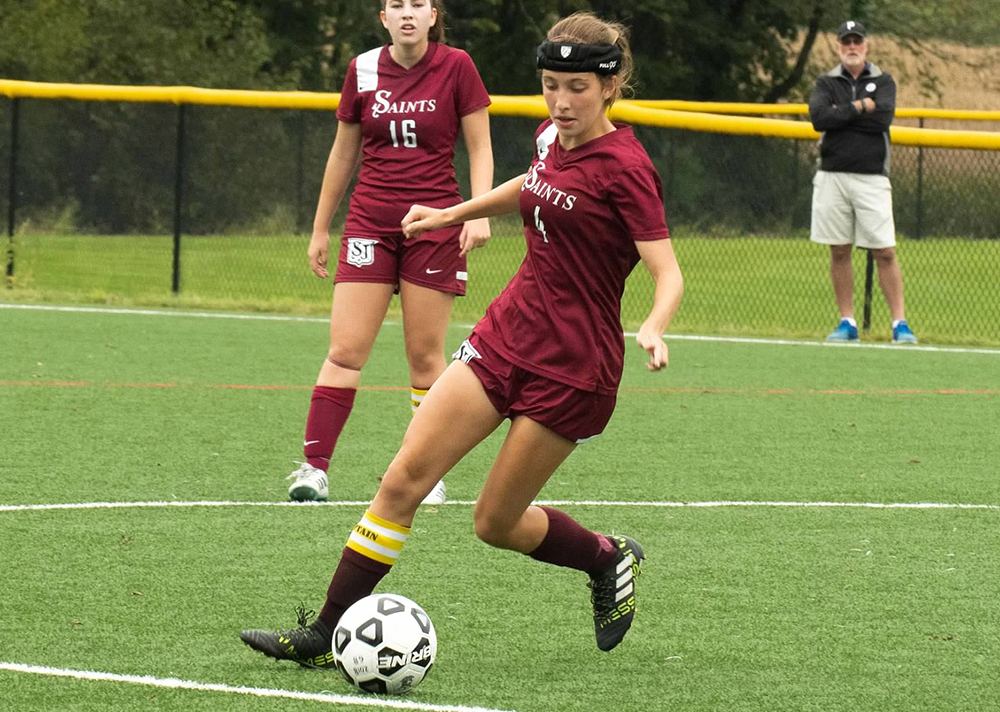 In anticipation of the challenges and opportunities presented by the 2018 fall season of girls soccer, the team’s guiding mantra came from a commencement speech by David Foster Wallace entitled “This is Water.”   “This is Soccer” served as a reminder of the power that comes from intentionally choosing one’s reaction in every situation.  In a season where nearly all of our key players were plagued by injury, this empowering and unifying idea, applicable both on and off the field, allowed the team to persevere in the face of many challenges. Perhaps the quality I most respect about this group of athletes, is how at nearly every turn, when they could have crumbled, they always kept fighting.

An extremely talented core of returning players welcomed a small incoming class of new students, Veronica Noel (Second Form), Sabina Noel (Second Form), Emily Vando (Third Form), Chloe Hardy-Moody (Third Form), Kali Mahoney (Third Form) and Amelia Shaw (Fourth Form) to the ranks.  The new players quickly assimilated to the rigors of a varsity sport and made their mark upon the program in a variety of impactful and positive ways.

The season started off with a bang and a streak of five victories.  Goalkeeper, Skylar Treadwell (Fifth Form) recorded two shutouts before her season ended early due to a groin injury.  Center midfielder, Alli Jacobson (Fourth Form) also fell victim to an ankle injury that sidelined her for the bulk of the season.  The streak included three come-from-behind victories, a satisfying 2-0 victory over cross-town rival and IPSL foe, Goretti, and a program defining win in which the Saints were able to rewrite the script of domination by stunning the top-ranked team in the state of West Virginia, Hedgesville High School.  Erin Miller (Sixth Form) had a heroic effort in goal tallying 19 saves and the team’s Most Valuable Player, and Captain, Lilly Noel (Sixth Form), put on a shooting clinic, recording a hat trick in the 3-2 victory.  Noel would finish the season with a team leading 13 goals and 4 assists.

From there, the season cycled through a period of tough losses, with a sprinkling of decisive wins and ended with a record of 8-8.  The defense was anchored by Samantha Brown (Fifth Form), Captain Brooke Adams (Sixth Form), Abby Barnes (Fifth Form), and Sabina Noel. Zoe Schlotterbeck (Third Form), Lauren Aguila (Fourth Form) and Kali Mahoney (Third Form) rotated through as necessity dictated.  The position requires players to work in tandem and the coordinated effort of these players thwarted the attacking effort of opposing teams more often than not.  Thanks to her off-season effort on ball skills and fitness, combined with her ability to actively engage with and apply every coaching point, Schlotterbeck earned this season’s Most Improved Award.

Arguably the most physically demanding position, midfielders play an important role on both the defensive and offensive sides of the field.  Aguila and Schlotterbeck were joined in the midfield by Captain and Coaches’ Award winner, Tessa Douglass (Sixth Form) and Maya Drabcyzk (Fifth Form).  Many players rotated through this position and the experience gained from playing multiple roles increased both their soccer IQ and their ability to be impactful both this season and in the future.  Douglass has been a fixture in the center of the field since her second form year.  The leadership and intangible effects of her presence are significant.  She finished the season with 10 goals and 4 assists.

Christa Bartlett (Sixth Form) joined Lilly Noel in the forward position and the two were a dangerous scoring combination.  Bartlett led the team with 6 assists.  Also rotating through were Drabcyzk, Shaw, Hardy-Moody, Jacobson, and Angie Antoine (Fifth Form).  In general, the team’s goal celebrations are pretty special.  Players sprint from all over the field to celebrate the collective effort that went into making the goal happen. It is the external expression of the camaraderie and the unselfishness which is the team’s secret weapon, and by far, the most special one of the year was when Angie scored off a cross by Amelia Shaw against Berkeley Springs.

Through sheer determination, perseverance, and will, the team earned second place in the IPSL Conference and the right to play in the Championship game against Mercersburg. Despite ultimately falling to Mercersburg 2-1, the hard fought battle epitomized all the traits that define Saints soccer.

Thank you to all the players who poured their hearts and souls into the team and to the faculty and parents for their support this season.