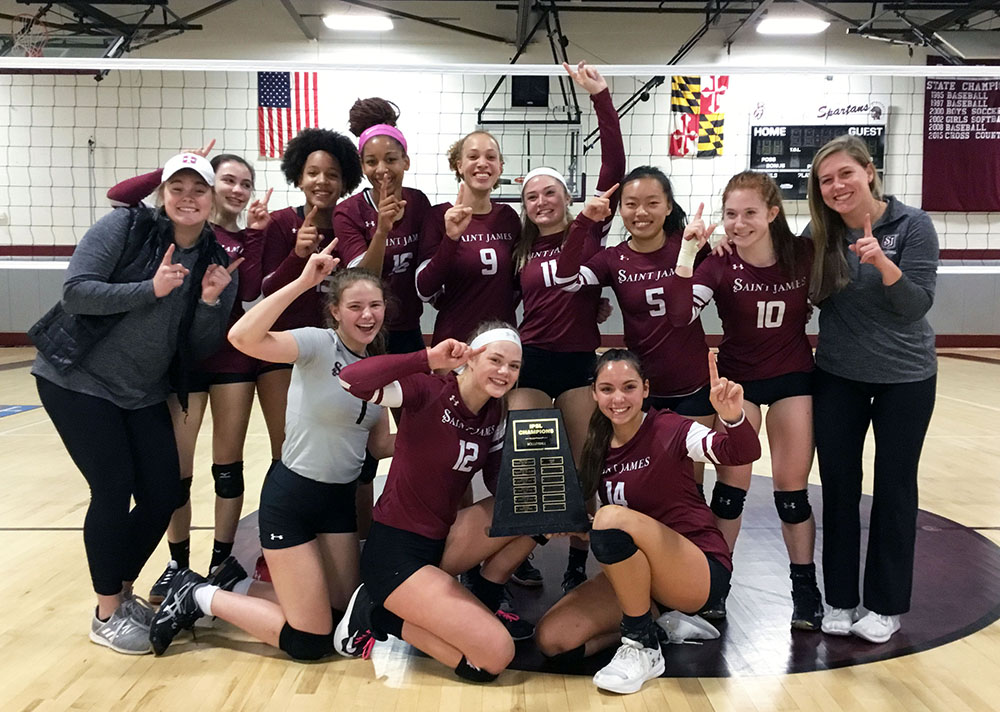 The 2018-2019 Varsity Volleyball team started with former assistant coach, Peyton Wallech, stepping up to be the team’s newest head coach, with a focus on game knowledge and coaching of all volleyball positions, specifically hitting. Coach Katherine Proctor remained as the team’s assistant coach specializing in team management and statistics. Coach Wallech and Coach Proctor took on the challenge of merging six returning players and four new varsity players (two of those being new to the sport) with only one week until the team played its first game.  The team encountered many obstacles, most of them regarding their lineup against public schools. Even with the amount of diversity the team experienced, they ended their season with a successful 11-7 record.

Some of the highlights from the season include:

Each member of the Varsity Volleyball program played a key part in this year’s season.
The raw athletic abilities of Gabby Grantham-Medley (Second Form) were always present on the court. Starting off the season timid, Gabby hit a turning point where she dominated the court. Her first season as a Saint was very successful as she finished second in kills for the team with a 187 total kills. Gabby also led the team in digs with a high of 137 digs.

Kayla Handley (Second Form) was also new to the Saints, and her natural height helped assist the front row in stopping the ball. Kayla contributed 16 single blocks for the Saints. Her attacking skills grew greatly over the season and her aggressive front row abilities were unveiled. Kayla totaled 26 kills for the Saints.

Catherine Charlton (Third Form) returned to the varsity team specializing in defense. Her serving could not be touched out on the court. Catherine’s drive to get better showed in the last few matches of the season. She showed up to the IPSL Championship Tournament with a fire to win! Catherine ended the season with 11 aces and 22 digs for the Saints.

Caroline Bowers (Fourth Form) returned for her third starting season with the Saints. As the only setter on the team, Caroline had a ton of pressure on her shoulders. She showed up every day ready to play and be the best she could be. Her leadership on and off the court was received well by all members of the team. Caroline ended her season with 20 kills, 27 aces, 51 digs, and a whopping 542 assists.

Nelly Xie (Fifth Form) was new to the varsity team this season, having played in the past on the JV team. Her quickness in the back row was important to our team’s success. Nelly came to practice each day ready to take on what the coaches had planned. She grew her passing skills and provided constant support for her team throughout the season.

Michaela Siegel (Fifth Form) was this season’s defensive punch. Whether she was in the libero jersey or subbing in for one of the middle hitters, Michaela always showed up. Her technical passing skills were hard to get by. Michaela was not only a key passer, but a key server for the Saints. Her game against Saint John’s single handedly turned the match around and set the tone for the remainder of our season. Michaela totaled 121 digs for the Saints.

Morgan Moseley (Fifth Form) returned to the varsity team as a starting middle hitter. Morgan led the team in blocks ending the season with 60. She also played a huge part in establishing front row attacks and gained the Saints 76 kills throughout the season. Morgan took on serving and playing back row this year and improved greatly. She showed up to every practice and game with a drive to dominate her position.

Grace Bowers (Sixth Form) joined the Saints volleyball team as a complete newcomer. She came to the team knowing nothing of volleyball except for the few times she had played around with her sister Caroline at their home. Grace was a raw athlete and eager to learn anything and everything there was to learn about volleyball in just three short months. Grace always tried new things and showed others the importance and fun of going outside comfort zones. She was placed into the game during critical times and always gave the atmosphere a new life.

Alessia Regazzoni (Sixth Form) returned for her fourth and final season with the Saints volleyball team. Throughout her career with the Saints, she encountered many changes to her position. She began as a middle hitter, then transitioned to outside hitter, and then completed in her last season as a floating outside/right-side hitter. Her versatility in all positions played a key factor in this year’s success. As co-captain, Alessia always controlled the tone of the game. She ended the season with 14 blocks, 31 aces, 71 kills, and an outstanding 112 digs.

Trinity Schlotterbeck (Sixth Form) also returned for her fifth and final season as a starter. Trinity was the glue to this year’s team. When she was not hitting, she was passing; she was always in the game. Trinity’s intense swing kept the other teams on their toes. Her competitive nature never let a ball touch the floor. She ended her season leading the team in kills with 192, and she also had 45 aces, and 135 digs.