Share to FacebookShare to TwitterShare to Google+Share to LinkedInShare to PinterestShare to EmailPrint this page
Meet Dr. Jonathan A. Pellish '00, NASA’s Electrical, Electronic, and Electromechanical Parts Manager 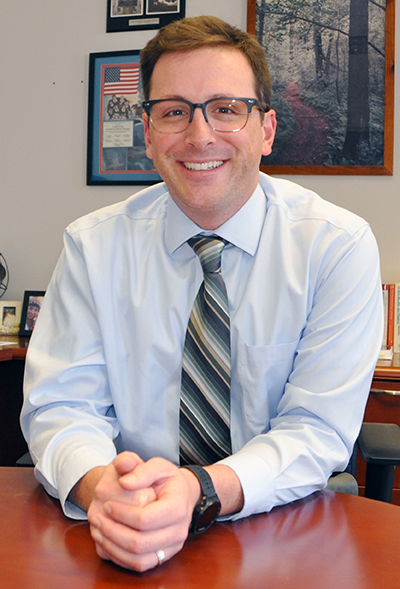 If not for a few chance encounters in his life, Dr. Jonathan “Jonny” Pellish (SJS ’00) might have ended up on a very different career path.  But as it stands, Pellish is employed at the Goddard Space Flight Center (GSFC) in Greenbelt, MD, as the National Aeronautics and Space Administration’s (NASA) Electrical, Electronic, and Electromechanical (EEE) Parts Manager.  Pellish is also the deputy manager for the NASA Electronic Parts and Packaging (NEPP) Program, which is operated by GSFC for the NASA Office of Safety and Mission Assurance.  That’s quite a change for somebody who started college as a philosophy and classical languages major.

After graduating from Saint James in 2000, Pellish found a home at Vanderbilt University and started his college career in the College of Arts and Sciences. By his sophomore year, he needed to take a physics class to fulfill a liberal arts requirement.  However, both the physics class for non-physics majors and the freshman-level physics class for engineers were full.  That left him in the physics class for physics majors, something he was dreading because “merging a hard science with a math wasn’t that appealing.” It turned out to be one of those encounters that ended up changing his life’s trajectory.

The physics department at Vanderbilt was small, and only graduated seven to eight students per year, and so his class had only six or seven students in it. It was taught by a dedicated faculty member, Dr. Paul Sheldon, an experimental, high-energy physicist who, it turns out, also made really good barbeque.  He ended up inviting his students to his house for brisket, and that factored into Pellish switching his major to physics.

“It was the way he [Dr. Sheldon] approached teaching — not being just a person at school, but having an existence outside of school and willing to open up to this smaller group of students; that sealed the deal for me,” Pellish said. “That was something very familiar to me coming from Saint James.”

Pellish earned his B.S. in physics with a minor in mathematics and formed close relationships not only with Dr. Sheldon, but others in the department as well.  He was looking into graduate schools, thinking he wanted to study experimental high-energy physics.  With graduate school applications out, he had another chance encounter in a hallway with a professor he had done work with, Dr. Robert Weller.  Dr. Weller asked if he had considered staying at Vanderbilt for his graduate work, and Pellish said that he had not.

“It turns out he [Dr. Weller] had been doing work with his colleagues in the department of electrical engineering and computer science,” Pellish said. “He told me that they were using particle accelerators, something I was familiar with in the physics department, and they were taking different microelectronic components and putting them in the beam of the particle accelerator to simulate the impact of the space environment on electronic hardware.”

As a result of that five-minute conversation, he ended up staying at Vanderbilt and studying electrical engineering.  He worked with Dr. Robert Reed, who previously had been a NASA civil servant at GSFC, and others within the Vanderbilt community to study the space radiation environment on electronic systems.

Pellish earned his M.S. and Ph.D. degrees in electrical engineering from Vanderbilt University in 2006 and 2008. From 2007–2008 he held an IBM Ph.D. Fellowship, which included a co-op position at the IBM Austin Research Laboratory.

Even though he wasn’t supposed to end up in physics or electrical engineering, he was able to find a home within those communities that felt familiar to Saint James.

“I think that thread was pretty consistent throughout undergrad and graduate school,” he said. “I found these tight-knit family groups based a lot on community and the way those different communities functioned, and the way that everyone looked out for each other. That always seemed to be a good guiding principal or initial assessment of whether this was the type of organization that I wanted to spend a lot of time with or invest in.”

Pellish started working for NASA at GSFC in November of 2008.  When he started, he was supporting a range of specific flight projects destined to observe the Earth, Mars, and an asteroid. His job was to determine if the hundreds or thousands of electrical components that make up a satellite or its instruments would hold up in a space environment.

“Your job as a radiation effects engineer is to understand how the space environment impacts those systems and whether or not the design or the part choices are correct or adequate,” he said. “You may need to simulate the space environment to understand how it will impact the ultimate function of the system – will it affect reliability of the system, will it affect the availability of the system, will it be there when you need it, will it last as long as it needs to last to fulfill its mission.”

Since that time his role has evolved, and as the NASA electronic parts manager he serves as an advocate and a steward for the electronic parts community within NASA, which covers radiation effects and areas more broadly related to electrical components, as well as workforce management and coordinating support with nine NASA Field Centers and the Jet Propulsion Laboratory (JPL).
He has a dual role within NASA, also serving as the deputy manager for the NASA Electronic Parts and Packaging (NEPP) Program.

“This is a forward-looking program to identify types of electronic component technology that future NASA missions will need,” he said. “We try to break those technologies down and assess them to determine what it is about this new memory device or this new type of processor or new type of power management transistor that we need to know to be able to fly it and operate it reliably in space.”
While Pellish finds his work interesting, he also enjoys working for an organization whose vision and mission he believes in.  The vision statement for NASA reads: “To discover and expand knowledge for the benefit of humanity.”

“I think having a vision statement that ends with ‘for the benefit of humanity’ does a really nice job of encapsulating why we do what we do and why it’s not self-serving,” he said. “This vision is not that far away from the motivations of Saint James. It’s a very selfless, work for the other, altruistic bent on how to live or how to be.”

Pellish started at Saint James as a second form day student from Martinsburg, WV.  He started boarding in his fifth form year and by sixth form was quite involved, serving as Senior Prefect, Senior Sacristan, Honor Council president, and playing on the golf and lacrosse teams.  He feels the best part of the experience is that Saint James puts you in an environment as a student that forces you to stretch, both horizontally, which makes you a well-rounded person, and vertically, which develops your emotional intelligence.

“The horizontal growth makes you a well-rounded human being, but the vertical development makes you a decent person,” he said. “I think with those two things put together there’s not a whole lot that you’re not going to be able to do. Having a system at Saint James that’s set up intentionally to create well-rounded decent humans is pretty impressive.”

Pellish currently lives in the Navy Yard area of Washington, DC with his wife, Claire. While he may not have planned out this career path that’s had him working at NASA for more than 10 years, it’s clear he made decisions that led him right where he’s meant to be.