Share to FacebookShare to TwitterShare to Google+Share to LinkedInShare to PinterestShare to EmailPrint this page
The Art of Furniture: Bruce Schuettinger '74 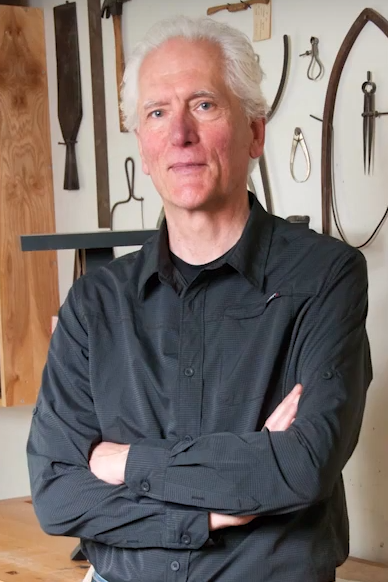 For many people, the furniture in a room is just there to serve a functional purpose. To sit on. To store something in. To set something on. But for Bruce Schuettinger ’74, furniture tells a story and is an opportunity for an expression of art, and it’s where he’s made his life’s work.

Bruce is the owner of two companies, one specializes in the conservation of historic furniture and architectural millwork and the other creates unique individually-titled fine art furniture.

Bruce trained in the collegiate studio fine art community where he studied design, craft, and art history culminating in his graduation with honors in fine art from Towson State University in 1978. His main areas of study were studio furniture, abstract painting, and color theory. In 1978 he won the best of show in sculpture for his chair entitled “Lounge Chair 1” in the Student Senior Show, a piece he still has in his home.  Because of his knowledge of art and acquired skills, he moved into the field of furniture restoration and then conservation.

“That came about because people understood that you work with wood and furniture and ‘can you fix this,’ so I went down that road,” he said.  “That’s how I got into the conservation side, it was a sub-level of my original art side and developing new furniture.”

Bruce is the principal conservator and owner of Schuettinger Conservation Services, Inc., and has been in the restoration business since 1983, servicing the Washington, DC metropolitan area as well as surrounding states.  By 1990, he was a full-time accredited wooden artifacts conservator. As a conservator, he is part art historian, part scientist, part detective, and part artist/craftsman.

“This area is rich in the collection of cultural property and the importance of them,” he said. “It’s been quite a satisfying life’s work.”

Bruce has worked onsite at the Department of State, U.S Capitol, Supreme Court, the Library of Congress, the Department of the Treasury, and many other government agencies, museums, and institutions. He said there is a tremendous amount of research that goes into the projects he has worked on, and he cited several that have stood out over the years.

One was a jewel-encrusted cabinet on a stand that dated back to 1647 and was presented in honor of a naval victory by Prince Frederick Hendrik, Prince of Orange, against the Spanish fleet.

“This was a really interesting project, and it took nearly three years to complete,” Bruce said. “It’s primary decorative surfaces were silver and gilt bronze inlaid in tortoise shell and ebony. We acquired the tortoise shell legally through the Smithsonian Institution. It was a tour de force in conservation.”

Another project was a John Shaw and Archibald Chisolm Tall Case Clock from 1775.

“It was in rather poor condition. We had to determine what the upper section of the clock looked like, so we brought in experts on that time period, and tried to figure out who the furniture influencers were,” he said. “What we came up with was the only known example to exist. Everything we did didn’t harm the original. An important aspect in conservation is that everything should be reversible.”

Bruce is also a trained personal property appraiser and has served as the president and treasurer for the National Capitol Area Chapter of International Society of Appraisers (ISA) and as an adjunct faculty of George Washington University Appraisal Studies Program, where he also developed two courses. He has lectured extensively for various institutions and organizations since 1990, including the Smithsonian Institution and the DeWitt Wallace Decorative Arts Museum.

Over the years Bruce has also continued to make furniture, and he has decided he wants to focus on finishing out his career back where he started, with furniture art. He owns Mosart, where he creates fine art furniture using traditional and meticulous hand craftsmanship. His studio is located in New Market, MD.

Bruce works in his studio and designs his own concepts, usually focusing on tables of various forms, though he is also working on a chest of drawers and a liquor cabinet.  Like any work of art, each piece is titled when complete.

“One of the things I’m trying to do with my work is to bring forth the concept that furniture used to be considered a form of art, just like architecture, and we’ve gotten away from that thought process, thinking that it’s just a functional piece,” he said. “I want to bring back that it really is and can be a work of art.”

He noted that each piece he creates has a document that describes what his influences were, how he created it, what the joinery is, the materials used, the artistic philosophy, and sometimes the meaning of the materials. Bruce said his background in fine arts and studying the history of furniture through his conservation work have shaped his current work.

“All of the experiences and learning that I’ve accumulated over time on the history of furniture have helped me see what works and what doesn’t,” he said.  “You see how the English, the Scottish, the Italians, the Japanese, the Chinese, etc. have all dealt with functional objects, specifically furniture, to know what joinery works, what finishes work, what woods are better for specific pieces.  All of that comes together at this point in my life to allow me to create the furniture that I am.”

Another aspect of his work is trying to be sustainable, often working to upcycle or recycle materials. He also noted that his studio’s electric power is from solar panels.

“If I’m using exotic woods from all over the world, then those woods are old stock and we’re buying collections from cabinet shops or woodmakers or things of that nature,” he said.

Over the winter, Bruce was back on the SJS campus, having donated a beautiful credenza made in 1850 in honor of Father Owens. The credenza now sits in the Saint James Chapel.

“The reason I donated that piece in honor of Father Owens was because he was a hugely important figure in my life. My dad died when I was seven-and-a-half, and he [Father Owens] served as a fatherly figure, and was a huge influence of my life,” Bruce said. “Some of the things he did towards the end of my tenure at Saint James were amazing. He had a tremendous amount of faith in me.  He saw something in me that I didn’t see in myself. And because of that, I am who I am today.”

He is proud to be a Saint James graduate, wearing his class ring every day, and had some words of wisdom to share with current Saint James students.

“Know that you can be an artist and make it in this world as an artist in multiple mediums. You don’t have to be stuck in just one,” he said.

You can view Bruce’s portfolio at www.mosartfurniture.com.