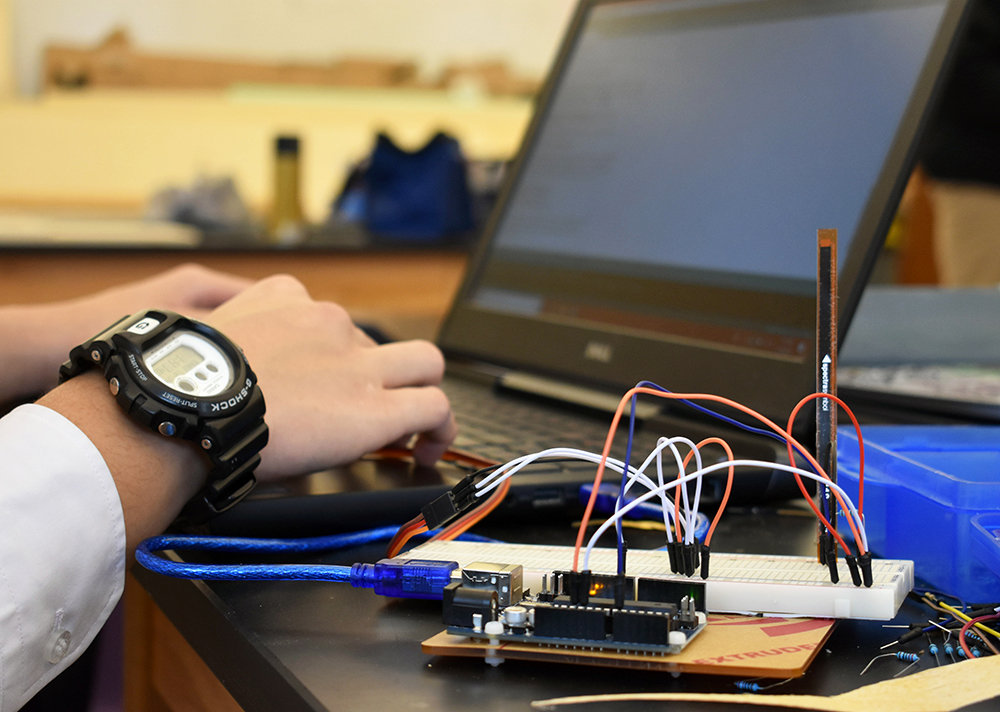 If you walk into the Saint James School FAB Lab while the Maker Club is in session you’ll notice it is a hub of activity as students go about working on various projects.  On this particular Thursday afternoon, those projects included a drone, a weather station, a remote-controlled airplane, a “useless” box, and a wooden maze to be used in an escape room.  There is an excitement in the air as the students bounce ideas off of each other to create, problem solve, and build.

FAB Lab stands for fabrication laboratory and is a platform for learning and innovation: a place to play, to create, to learn, to mentor, to invent. The international network of FAB Labs is an initiative of MIT and was conceived to be an entrepreneurial center where anyone could take an idea and turn it into a prototype or even a product.

All MIT-certified FAB Labs are comprised of common tools and equipment that allow you to "make almost anything" using open source software and programs written by researchers at MIT's Center for Bits & Atoms. The FAB Lab Network is an open, creative community of fabricators, artists, scientists, engineers, educators, students, amateurs, professionals, of all ages located in more than 78 countries in approximately 1,000 FAB Labs.

"A FAB Lab was not originally envisioned to be a school thing, but an entrepreneurial thing," said Dr. Ian Brauner, Director of the SJS FAB Lab and Science Department Chair. "MIT recognized there are lots of people who have knowledge of these computer programs and ideas, but don't necessarily have a 3D printer or shop bot. They wanted to create a space where an entrepreneur can come in with an idea and prototype it and then send that digital design to a factory that can mass produce their product. So the idea was to create a network of labs where anything you make in your FAB Lab in Beijing, I could make here at Saint James because there is a common skill set and a common set of equipment."

The Saint James FAB Lab is one of only two FAB Labs at a secondary school in the state of Maryland, and one of the few in the country; most are at research institutes or colleges. Work in a FAB Lab starts with the design of an idea, using a computer-aided program, or CAD, and then the FAB Lab has an additive or subtractive computer-controlled machine to make the idea a reality.
The SJS FAB Lab capabilities include 3D printing, CNC-milling, circuit production, laser cutting, precision milling, and vinyl cutting. The students use a CAD program called Fusion 360, a professional-level program for engineering and design.

“When kids are learning CAD design using Fusion 360 it’s not like they’re designing like an engineer, they are using the same tools that an actual engineer would use,” said Dr. Brauner.

Another important aspect of a FAB Lab is that the skills needed for the creation process are more accessible.

“With a FAB Lab, you can be taught how to use the tools to design stuff that the average person couldn’t make by hand,” he said. “Not that it couldn’t be made by hand, but the average person couldn’t make it by hand. At the end of a month, I could teach any student how to make that [wooden] guitar on a computer. But it would take years of practice to hand carve that. That’s what digital design is all about – the skills are more teachable and therefore more accessible.”

Using a computer program to model what they are making is an important first step in the design process.  Students will often start a project with a 2D drawing, and then create a 3D model in the CAD program. It is easier to catch mistakes in their design in the CAD program because it gives them a “virtual” physical object.

“It’s easier for students to look at it and say ‘oh, that won’t work’ once they see it in 3D,” said Dr. Brauner. “It’s the first step in the iterative design process, even as they are designing it on the computer, they are already going through iterations of their design.”

Second former Riley Bishop joined the Maker Club after the conclusion of the second form play, and hit the ground running. He remembers Dr. Brauner approaching him about the club and showing him the Fusion 360 software.

“It took a while to figure it all out, but I woke up at 5:00 a.m. three days later and spent the entire morning designing a logo for my favorite football team and printed that out and now it’s at my house,” Bishop said.

A native of Canada, Bishop worked with Dr. Brauner to create an ice tip up used for ice fishing. Bishop designed it in the Fusion 360 software, made some adjustments in his design along the way, and then used the shop bot to cut out a prototype using a foam board to make sure his design would work. There were a few issues which he corrected in the design, and he was then able to complete his project and use it when he went ice fishing over spring break.

“If we had done it by hand it would have taken us longer, and the next time we wanted to create it, it would take equally as long as it did the first time,” said Dr. Brauner.  “The technology allows us to not start over from scratch when we go to make it again; we have a working design. We just have to fix and add the changes that need to happen so that we can be totally confident that when we cut it out for real it’s going to work.”

Sungbum Lee ’22 and Spencer Pentony ’23 are working on a "useless" box, a device that has a function but no direct purpose. Using the FAB Lab network, they found an existing design to use. Once they cut it out on the laser cutter, they realized it wouldn’t work with the motor they had, so they modified the design for their needs.

“It still may not work. But they’re not starting over every time,” said Dr. Brauner. “They might realize ‘we need a hole here’ or ‘it needs to be wider’ or whatever the case may be, but it’s all part of the process. It’s all about, 'it doesn’t work, let’s fix it.' And because it’s digital, it’s easier to go through the various iterations of the process. I think that’s what’s really unique about this.”

Dr. Brauner notes that failure is an inherent part of the design process, but that students have more opportunities for success when facing a challenge.

Dr. Brauner feels every student can benefit from the FAB Lab, not just those students interested in engineering, because it teaches resiliency.

“We live in such a high stakes culture now where kids don’t really feel like they can fail. But the problem with that is obviously that learning to overcome failure results in resiliency,” he said. “It’s an important skill that’s particularly lacking in our high-achieving kids. I want to create a safe space where it’s not only ok to fail, but it’s part of the process.”

Sixth former Will Moerschel has seen the evolution of the Maker Club, starting as a 3D printing club a few years ago, then a game design club, and now the Maker Club in a full-blown FAB Lab.  Moerschel is working on a drone, which he started by doing research about how drones work and what might work for him. He picked an auto-leveling drone and created the body on the 3D printer. The “brain” of the drone is an Arduino Uno circuit board that he coded using their open-source software. He is hoping to have it done by Alumni Weekend. Although he is more into photography and film, he is grateful for the exposure to the equipment and database.

“The FAB Lab being here gives me access to exploring other paths I might want to take in life, and the same for others as well,” he said.

Currently, the theater department has taken advantage of the FAB Lab, using its equipment to help build sets and props, but part of the vision for the FAB Lab going forward is to use it as a multimedia resource for the entire school, using the space to enhance projects for any class.

“For example, there is a Day of the Dead mask project and the students draw them out, but wouldn’t it be cool for the students who can’t draw to use online images and make it more about the images than the physical skill of drawing,” said Dr. Brauner. “That way they can focus more on the content, and then use the design tools to make something really nice without needing to be great artists.”

Within three years, Dr. Brauner would also like Saint James students to be doing FAB Academy during their fifth form year. FAB Academy is a fast paced, hands-on learning experience where students (of all ages) plan and execute a new project each week. Each individual documents their progress for each project, resulting in a personal portfolio of technical accomplishments and a FAB Academy diploma.

“At my last school [Charlotte Latin], I started the first FAB Lab at a high school, and they are three years in, and now have students in FAB Academy,” he said. “So now they have students applying to engineering school who have documented this skill and it’s putting them in an entirely different league in terms of getting into college. If you want to make yourself stand out, I can’t imagine a better way to do that than saying you’ve completed this really intense MIT engineering course.”

Dr. Brauner noted that part of the FAB Lab certification process is not just having the equipment, but also having somebody with a FAB Academy certificate in charge so they have the knowledge and skill set to use those tools and an understanding of the design process.  Dr. Brauner completed the FAB Academy while teaching at Charlotte Latin, and said the course is challenging because the project you build each week actually has to work (not almost work).  He also said students in FAB Academy have to document each step in their process.

“Part of documentation is the idea of sharing your projects and how you made them,” he said. “The first step in the design process, ironically, is seeing what other people have done that is similar to what you want to do. There’s very much a paying it forward mentality that’s part of the process.”

Going forward there is also a plan in place to formalize the mastery of the skills acquired in the FAB Lab.

“The Maker Club will be more like a hybrid class where each marking period or trimester will have a specific theme,” Dr. Brauner said. “Students will have some latitude in what they make, but within a certain category. That will make it more feasible to teach the kids how to use the tools. After they’ve mastered the skills, they can work more independently and work as student leaders to help the next generation of students coming through.”

Next year, Saint James will also have a robotics team as a winter sport option. Dr. Brauner is collaborating with a teacher in Baltimore to potentially create their own competition, one that focuses less on expensive robotics kits and more on building the robot from FAB Lab equipment.

The FAB Lab is currently located in a classroom on the bottom level of Powell/Fulton. Funds are being raised through the Make a Difference Campaign to build a brand new space in the Cotton Building, renovating and relocating to the space where the locker rooms are now located.

The future is certainly bright for the growth of this program as our students engage in this more active model of learning.