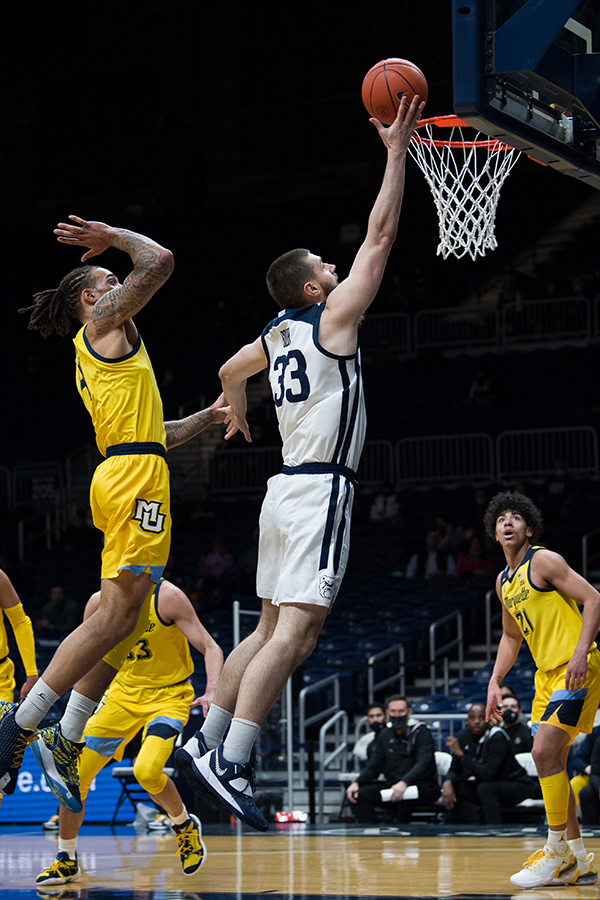 Bryce Golden ’18 and the Butler Bulldogs were in New York City for the Big East tournament in March 2020 right as the coronavirus was threatening to shut the country down. The Bulldogs had gone
22-9 in the regular season, were almost assured a spot in the NCAA tournament, and were ready for their run at the Big East title. All of that came to an abrupt halt.

“We had the noon game on Thursday, and I woke up early and looked at my phone to see all kinds of conference games getting shutdown. The Big East was the last conference to cancel,” Bryce said. “Right up until we were about to get on the bus, we thought we were going to play. Then we got shutdown, and a couple hours later they told us March Madness was cancelled.”

Bryce ended up taking a train back to his home in Virginia, where he would be for the next five months. Fortunately for Bryce, his brother Grant '16 was also home, and the two were able to train together while the country was mostly in lockdown.

“There was a court down the street from our house, and I don’t think anyone had used it in years,” Bryce said. “We would go there to shoot around and take a break from everything. We got some weights and made a makeshift gym in our basement.”

Bryce came back for his junior year at Butler in the fall with online classes and small group workouts before gradually expanding to full team practices, all while not knowing for certain if there would be a season. At the end of October, when games are usually starting, the Big East announced games would begin by the end of November. There were new protocols and adjustments to make, but one thing Bryce said he didn’t notice was playing in front of reduced crowds or empty arenas.

“That was one of the things everyone talked about, but I personally didn’t notice too much of a difference,” he said. “Once you’re out there playing, basketball is basketball, whether everyone’s watching or nobody’s watching.”

The 2020-2021 season was up- and-down for the Bulldogs, who finished 10-15 and lost to #17-ranked Creighton in the quarterfinals of the Big East tournament. Bryce started all 24 games he played in and averaged 10.4 points and 4.7 rebounds per game.

Transitioning from high school to college basketball is already a big learning curve, but Bryce had the extra challenge of recovering from a shoulder injury when he first arrived at Butler for his freshman year. He had shoulder surgery prior to his graduation from Saint James and was out until December. He did not redshirt, but took everything in, and then came back for his sophomore year bigger, stronger, and ready to go.

“The pace of college basketball is so much faster than high school,” he said. “The biggest adjustment for me was just keeping up because it’s just one thing after another after another. There’s not many plays you can take off and not give up a bucket or a rebound.”

Bryce also said with college basketball there is greater attention to detail, and the daily schedule reflects the intensity of preparation.

“The schedule is very set here every day. It’s class then film then weights and practice. Rinse and repeat every day. Saint James benefited me in that regard because it was a similar structure,” he said.

Bryce now stands at 6-foot-9, but he can recall playing on a plastic Fisher Price basketball hoop when Grant was four and he was a toddler. He joined a very competitive travel team in eighth grade, not long before he and Grant came to Saint James.

He said he started to get seriously recruited after his fourth form year at Saint James, when he also joined Team Takeover, an AAU team that played on a competitive circuit.

“Recruiting is a business. So, everything you hear on a recruiting trip is everything you want to hear,” Bryce said. “Fortunately, I had a good group around me with my parents and Coach Prete and Coach Shop to bring me down a little bit and make me look at things in a more sensible way.”

“I knew going into my senior year I couldn’t let my brother one-up me in getting a championship his senior year,” Bryce said. “So, we got it done. Not many people get to end their career on a victory, and I got to.”

Bryce is thankful for the opportunity to have met so many people from various backgrounds during his time at Saint James.

“I came from a public school in rural Virginia so there wasn’t much diversity, but going to Saint James I got to meet a lot of different people from a lot of different places and different backgrounds,” he said. “To this day I still talk to kids that were from Japan and China and all over the place, so it was great to see that and experience that at a young age. It opened my eyes up to the fact that there’s a bigger world outside of where you are currently right now.”

Bryce is looking forward to things returning to normal before his next season at Butler, located in basketball-crazy Indiana. The passionate fan base is one of the things he loves most, and he hopes to give them something to cheer about.

“There’s a standard here at Butler where we’ve been to two Final Fours and that’s something that’s not out
of our grasp. There’s a blueprint for us to do it,” he said. “Butler over the last 10 years has been the marquee program in Indiana. It’s been great to play here and I’m excited for my next couple years here as well.”

With Grant also returning to Richmond, there’s still one more season for the brothers to potentially face off in the NCAA tournament, something Bryce joked would either “go great or go horribly and we’d get double techs in the first five minutes of the game.”

“Obviously, it would be a dream of mine,” Bryce said. “He’s always been someone I looked up to and admired, on and off the court, and everyone wants a chance to go against their idol.”