Share to FacebookShare to TwitterShare to LinkedInShare to PinterestShare to EmailPrint this page
John Metchie, III '18 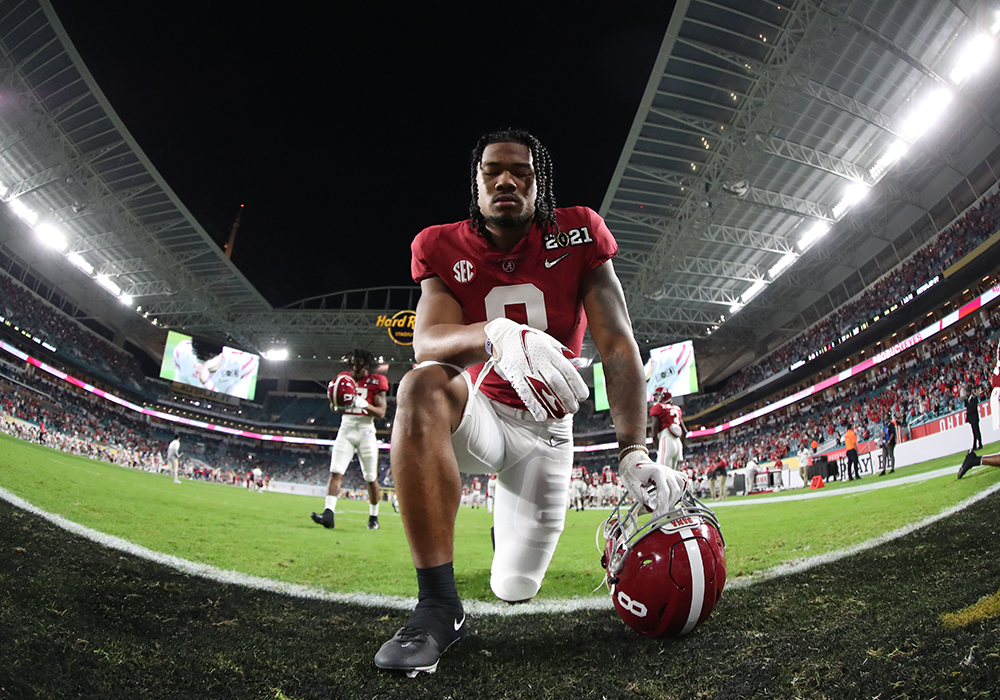 If you were fortunate enough to watch John Metchie, III ’18 play football for the Saints on Turner Field, you would know it is obvious that he’s a special player. With speed and agility, he seemed to effortlessly haul in passes and dodge defenders. He put up some of Washington County’s all-time best numbers for receiving in his four years at Saint James.

Knowing his work ethic and drive, it’s also no surprise that he has excelled at the University of Alabama, college football powerhouse for the past decade under head coach Nick Saban.

Metchie had eight receptions for 81 yards in the 52-24 victory over Ohio State that earned the Crimson Tide the national championship and capped off their undefeated season, a season that began with a lot of uncertainty due to the pandemic.

"It was a great feeling just because of how long the process was and
how long the season was, dealing with COVID throughout the year, not being able to see family, and all of the hardships that came with it
for everybody," Metchie said about winning that national championship. "So, at the end, finally winning, was a great way to end the year for us."

Metchie said it all started in the summer with Alabama facilities closed. Teammates were scattered, with some going home to workout while others who stayed in Tuscaloosa trying to find ways to work out together. He said he tried to keep a consistent routine, all while not knowing if there would be a season.

"It was hard preparing for a season but at the same time not knowing if there was even going to be a season, and to try to work towards a goal that you don’t know if it’s even there," Metchie said.

Meanwhile, COVID policies in the state of Alabama and at the university were not as strict as other places, with many people ignoring guidelines and going about their daily routines. To avoid cases on the team and the need to quarantine, the coaches advised players to be responsible and put the team first.

“At the beginning of the season, our coaches told us the winner of this season is going to be whoever handles this situation the best because everybody was going through it,” Metchie said. “I think as a team we definitely handled it well. We did have some cases, but we were able to minimize it.” 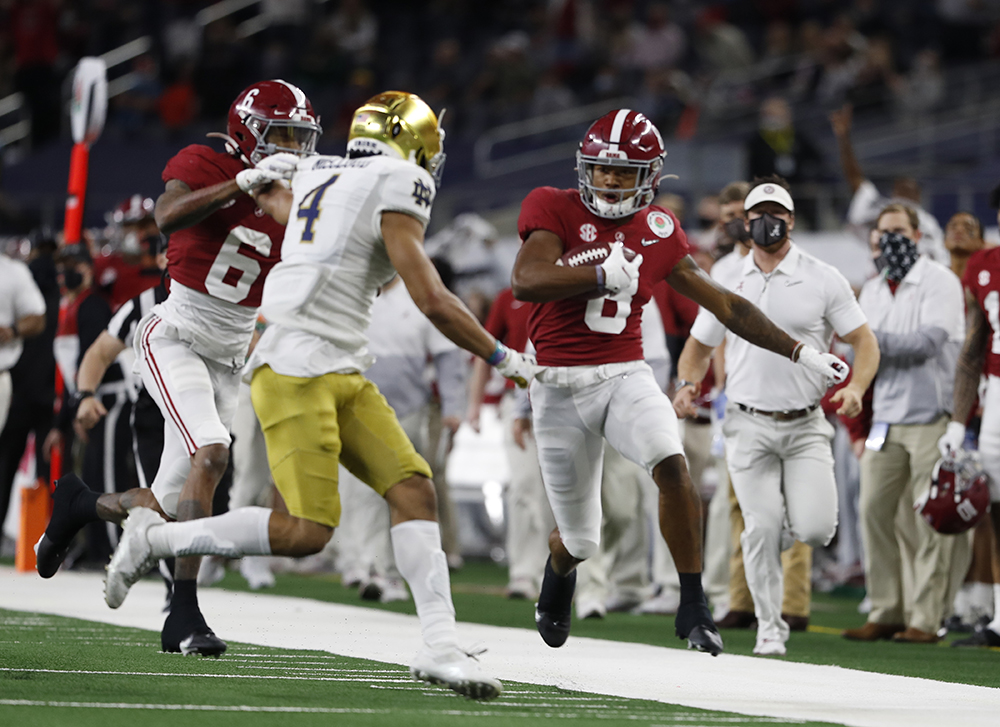 Metchie started the season as the team’s number-three wideout, but his role expanded after senior wide receiver Jaylen Waddle went down with an injury. Metchie made the most of his opportunity, ending his sophomore season with 55 catches for 916 yards and six touchdowns on his way to a national championship.

Metchie said when colleges started recruiting him while at Saint James, he had a vision for himself and where he wanted to go to college. He had about 25 offers from Division I schools before deciding on Alabama.

“Coming here [to Alabama] and seeing the environment and the fact that I’d be surrounded by like-minded people and a like-minded organization for people to support me, it was definitely a no-brainer for me,” he said.

Under Coach Saban, the Crimson Tide have now won six national championships, and Metchie said it’s a unique experience to play for him.

As a freshman, he had the opportunity to learn from the best, including four future NFLers at the wide receiver position for the Crimson Tide. Jerry Jeudy and Henry Ruggs III were first-round draft picks last year and DeVonta Smith (this year’s Heisman Trophy winner) and Waddle are projected to go in the first round in the 2021 NFL Draft.

"It was great, especially coming in my freshman year when they were all here and I was younger," Metchie said of playing with those receivers. "At the time I didn’t have a significant role on the team, but it was a big opportunity for me to learn and develop."

Metchie said the amount of prep work that goes into each game during the season was unimaginable to him prior to coming to Alabama.

“You start the week off learning your opponents, their names, their numbers, how they play, what they like to do, watching their games over and over again,” he said. “Then you go over your plays, and new plays you’re going to put in for how you want to attack these specific teams. Then going out and practicing it. The preparation for it is second to none, especially here."

Metchie got started playing football late. He was born in Taiwan and lived in Ghana until the age of six, when his parents moved him and his siblings to Brampton, Ontario. He played soccer and lacrosse in grade school, but says he didn’t really start playing football until middle school, after watching his brothers play.

He ended up hearing about Saint James through Tyler Grochot ’18, a fellow Canadian. At the age of 14, he moved to Hagerstown to pursue his football dream.

Metchie put up big numbers for the Saints, recording more than 1,300 rushing yards, 2,500 receiving yards, and total 42 touchdowns. He said even though Saint James is small, it was the biggest stage he knew at the time and he made the most of it.

“It was a great experience. I learned a lot and grew a lot and met a lot of great people,” he said. Some of the skills he learned he has carried with him. A business/finance major at Alabama, Metchie was on the 2020 Fall SEC Academic Honor Roll.

“Saint James definitely prepared me as far as independence and structure and gave me a lot of tools that a regular high school or a lot of other places wouldn’t have given me,” he said.

Metchie said being around students of various backgrounds is the most important thing he took away from Saint James.

“The most valuable lesson I learned there was how to co-exist, and not just co-exist, but thrive amongst different types of people,” he said. “That goes as far as races, white, black, Asian, Hispanic,
etc., but also people of different backgrounds, kids who grew up less fortunate like me and kids who grew up wealthier.”

The Crimson Tide are already preparing to defend their national title next season. Metchie could become Alabama’s number-one wideout, but he’s not worried about other people’s expectations.