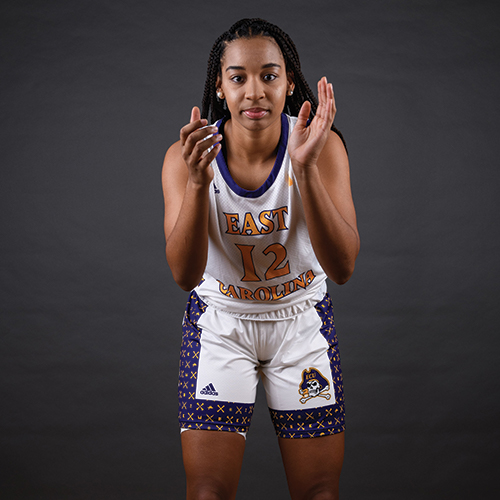 Morgan Moseley ’20 grew up in a family of athletes, so it is probably not surprising that she is a collegiate athlete, playing basketball at East Carolina University. From Centreville, VA, Morgan is the daughter of Kimberly and Anthony Moseley and she has four siblings. Her mother was an All-ACC track runner at Virginia while her sister Mia is currently playing lacrosse at Delaware State. Her brother, Michael Moore, lettered in football at Virginia and is now playing for the Edmonton Eskimos in the CFL.

“My older brother played basketball when he was younger, and I always looked up to him,” Morgan said. “He’s one of the reasons I started playing basketball in the first place, when I was around four years old.”

In grade school, Morgan played both travel lacrosse and club basketball, until she decided to focus her efforts on basketball. She eventually played on the Powermove AAU (Amateur Athletic Union) team.

When Morgan was in sixth grade, she took an overnight school trip to Saint James. The group stayed in the wrestling room and made Saint James their base while visiting Antietam and Gettysburg battlefields. When it came time to choose a high school, Morgan said her advisor talked to her parents about Saint James and encouraged them to apply.

“When I came to visit, I was already familiar with the campus, and I really liked the family culture and everything. It made the decision easy,” Morgan said.

The girls’ basketball team went 81-24 over the last four years, with Morgan being named the Washington County Co-Player of the Year, along with teammate Skylar Treadwell
’20. Morgan and Skylar also both surpassed 1,000-career points, two of the three females in SJS history
to reach that milestone (along with Heather Lowery ’08). Last year, the Saints won their second consecutive National Championship at the Washington D.C., Title IX Christmas Tournament and their third straight IPSL Championship.

In addition to dominating on the basketball court, Morgan lettered in soccer, volleyball, and lacrosse during her time at Saint James. She was named Second Team All-County in lacrosse her fourth form year, her final year playing lacrosse. Morgan was a force at middle blocker on the Saints volleyball team, helping them win the 2018 IPSL championship.

“It’s especially good for high schoolers to play multiple sports because a lot of college coaches will say you can burn out if you just play basketball every day, all-year long,” Morgan said. “Joining multiple sports teams also helped me make different types of friends.”

When it came time to think about college, Morgan said her mom had learned from her brother’s recruiting experience to start early and be proactive in getting in touch with coaches.

“I would send my highlights and my grades and let them know who I am,” she said. “You have to get your name out there early and often.”

Morgan said she ended up with 13 offers, including five that she considered seriously. Morgan’s first offer came from Hartford. When the coach, Kim McNeill, moved to East Carolina she offered Morgan a scholarship with the Pirates.

“When I went to visit ECU, I already had a relationship with the coaches. I liked the campus, it was beautiful, and I loved the warmth of the south. So, everything just came into place,” she said.

Morgan said she didn’t get to have a typical first-year college experience due to the pandemic, but still feels she had a good year.

“It was a learning season for me. Even though I wasn’t getting a lot of playing time, I was learning the game, watching a lot of film, practicing, keeping up with everything,” she said.

Morgan, who is majoring in exercise physiology, was able to earn 35 credits through AP exams she took at Saint James, and feels academically she had an advantage during her freshman year.

“Time management is the biggest thing, especially as an athlete. When we were actually going to class, I had conditioning at 8:00, class at 9:00, then I had to run across Greenville to get to the labs, and go straight from class to practice. So knowing how to manage my time and get my homework done was huge,” she said.

Morgan also said the relationships she made at ECU this year reminded her of Saint James.

“Our team is big on family and that kind of carries over from Saint James because it’s definitely like a big family at Saint James as well,” she said.