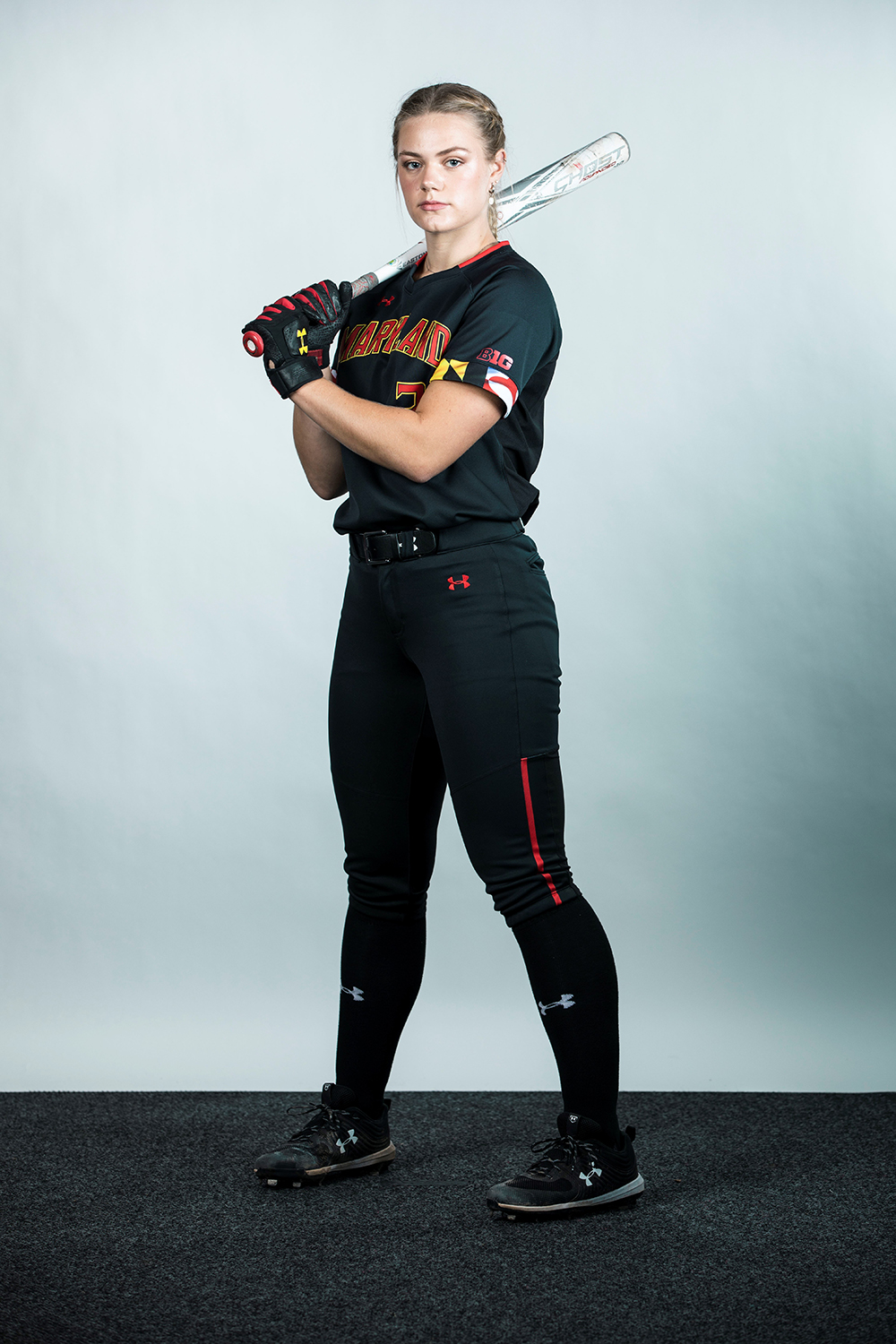 Trinity Schlotterbeck ‘19 dominated opposing batters while pitching for the Saints softball team, and she’s now taking on Big 10 talent at the University of Maryland.

Over her final two seasons at Saint James, Trinity fanned 345 batters in 166 innings, earning a scholarship to play for the Terps. She pitched a no-hitter against Madeira School with 21 strikeouts (yes, that means every out was a strikeout!). Trinity was named the 2018 Washington County Pitcher of the Year, but she was also a force at the plate. That same year, she had county highs for average (.786) and home runs (8), including three grand slams.

At Saint James, Trinity also starred on the volleyball team as an outside hitter, earning All-County honors multiple times and helping the Saints capture the IPSL title her senior year.

“I loved that I had the opportunity to play. If I went to another school, I don’t know if I would have played volleyball because it wouldn’t have been required,” she said. “I probably would have just played softball all- year round. So, it made me take a step back from softball and take that mental and physical break and focus on something else that was important to me.”

Trinity is majoring in Communications/Public Relations with a minor in Leadership and credits Saint James for teaching her study skills and time management.

“I definitely benefitted from learning how to manage your time correctly and learning how to be successful while you’re busy,” she said. “I picked up those traits at Saint James.”

Trinity's father, Chris ’91, was her softball coach at Saint James and a pitcher for the Saints as well. Her dad, along with her brother Isaac ’17, also a pitcher, were major influences while growing up.

“My dad was the one who taught me how to hit, pitch, throw,” she said. “Having him always there in my corner was definitely an advantage. Someone who could always take me out, help me pitch or catch me, that definitely made me a lot better.”

“I was playing with fifth graders, and they were pitching, and I thought ‘I want to do that. I want to be the person in the circle, the person that controls the game,’” she said.

Trinity started playing on a club team at age 12. She played on
three different club teams as she progressed, including summer travel ball in Birmingham, AL, for two seasons.

Trinity said she started taking softball seriously around age 14 because she was already seeing players around her getting recruited for college.

“Recruiting was happening at a very young age. So, 7th and 8th graders were getting recruited to Division I colleges,” she said. “By 8th grade I wasn’t getting recruited by big schools, so I just thought I’d go small DI or DII. Which is crazy for that age.”

Trinity said it was luck that she wound up at the University of Maryland. Her travel coach encouraged her to go to Maryland’s camp the fall of her third form year, where she met the Terps coach.

“The coach said 'we want you here.' The following week I went on a visit and she basically sold me on the school and a few months later I committed,” Trinity said. “It was a quick process for me.”

Her freshman season at Maryland was off to a great start before the pandemic cut it short. She was named the Big Ten Co-Freshman of the Week in early March, becoming the first Maryland player to ever receive that honor. It came after the Panther Invitational in Miami, where she went 3-0 and threw three complete games with a 0.97 ERA. But not long after they returned to Maryland, the season ended abruptly.

When the team started back up in the fall, they were doing individual workouts in groups of no more than five players. By the end of the fall, they gradually worked up to full team practices. There was still uncertainty about whether they would have a season.

“We were on-edge throughout our winter break because they hadn’t told us we were going to play,” she said. “So, when we found out, that initial feeling was amazing. Knowing that all of the hard work we put in is finally going to pay off. We can show people what Maryland softball is all about.”