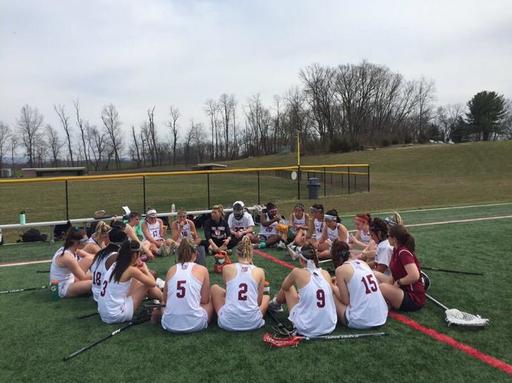 Saint James School is proud to announce that its girls' and boys' lacrosse teams will be under the leadership of two coaches with impressive résumés who are both former members of the U.S. National Lacrosse team. Theresa Ingram-Kuhar was hired in the fall and is coaching the girls' lacrosse team this spring, while John Tucker was recently hired to take over the boys' lacrosse program beginning next season after he starts his tenure as the school's Director of Admission this summer.

Theresa Ingram-Kuhar didn't start playing lacrosse until she was a freshman in high school, but she quickly excelled and went on to play at the University of Maryland. During her four-year career as a Terp, her team reached the NCAA Final Four in each season, winning the NCAA championship in 1992. Her team went undefeated her final year and Ingram-Kuhar earned Academic All-American honors. A great deal of hard work and dedication led Ingram-Kuhar to being selected to the U.S. National team, where she competed at the highest level for more than six years.

Ingram-Kuhar served as an assistant coach at George Mason University and Duke University before becoming one of the youngest head coaches in the Ivy League at Brown University (1998-2004). In 2010, she was inducted into the Greater Baltimore US Lacrosse Hall of Fame. Ingram-Kuhar has also been a camp director on both coasts, clinician nationwide, and a mentor to athletes in her community.

"It is with great excitement that I have the opportunity to coach lacrosse at Saint James School, a wonderful school that believes in its students and supports their growth and learning on and off the field," said Coach Ingram-Kuhar. "Having high expectations and taking on challenges is a philosophy that is important to me. A few games into our season, I see our athletes carrying this into our games and practice. This team is ready to work hard, stay focused, and they fully believe in making the 2019 season a positive one." 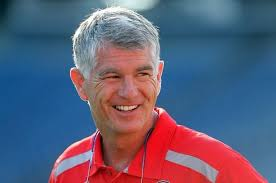 John Tucker won two state championships while at Archbishop Curley High School and continued his lacrosse career at Johns Hopkins University, where he was a three-time All-American. He was a member of the undefeated JHU team that won the 1984 NCAA championship. In international competition Tucker played for the U.S. National team, winning three gold medals at the World Lacrosse Championships in 1986, 1990, 1994. Tucker played professionally for the Philadelphia Wings of the Major Indoor Lacrosse League, winning two championships.

A veteran lacrosse coach for more than three decades, he has led a number of teams to championships, including a total of four Maryland Interscholastic Athletic Association championships: three with the Gilman School and one with Loyola Blakefield in Towson. He has also coached the Los Angeles Riptide and the Boston Cannons of Major League Lacrosse (MLL), and was twice named MLL Coach of the Year.

"It's an honor to take over the reigns as head coach of the Saint James boys lacrosse program," said Coach Tucker. "My primary goal is always to teach the game and help our players reach their full potential. Saint James can be a destination school for players who have a desire to play at the highest level of competition. The school is perfectly situated between DC and Baltimore which will allow us to showcase our team against some of the finest programs in the nation. I can't wait to start this journey in June."

Both of these coaches will be a major asset to the Saint James lacrosse program, and we look forward to watching both the girls' and boys' teams grow under the leadership of Coach Ingram-Kuhar and Coach Tucker.

"We are incredibly excited to have these highly accomplished, Hall of Fame coaches working at Saint James School," said Scott Barr, SJS Athletic Director. "Both have reached the pinnacle of their sport as players and both have coached some of the best players in the game and understand what it takes to be successful as lacrosse players. Most importantly, both Theresa and John are fine people who fully understand the value that sports plays in the lives of our children. We are very excited to build on the long lacrosse legacy at Saint James (this year marks the 50th anniversary of lacrosse at SJS) and we have the right coaches in place to make that happen. This is an exciting time to be a player in our lacrosse program. I am very excited for our kids."

Founded in 1842, Saint James School is a coeducational, Episcopal boarding school with a smaller day student program, located in Hagerstown, Maryland, 75 miles from both Baltimore and Washington, D.C. Approximately 235 students in grades 8-12 attend Saint James, representing 13 states and 14 countries. As a result of the strong tradition of academic excellence, with competitive athletics and a full program in the arts, Saint James School challenges its students to grow academically, athletically, artistically, socially, and morally.